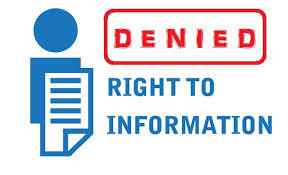 PESHAWAR, 16 July: For the first time since its inception, the Right to Information (RTI) Commission has imposed fine on the registrar of Abdul Wali Khan University, Mardan for not cooperating with the commission.

The commission said that Abdul Wali Khan University Mardan Registrar Sher Alam Khan refused to give information about certain appointments in the varsity, which led to imposition of Rs. 25,000 fine on him. He would have to undergo two years imprisonment if he fails to deposit the fine money.

The Right to Information Act was promulgated in 2013 which provides that every citizen of the Khyber Pakhtunkhwa province can have access to information at any provincial office.