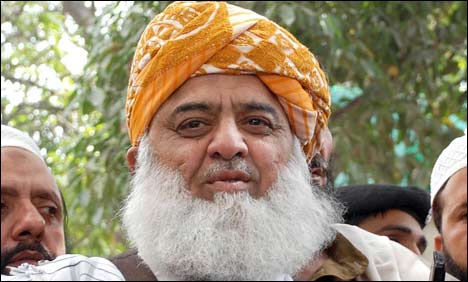 PESHAWAR: The Jamiat Ulema-e-Islam-Fazl (JUI-F) ameer Maulana Fazlur Rehman has asked the government to tell facts to the people about Kashmir issue instead of adopting an apologetic attitude.

Fazlur Rehman said while addressing the Central Shura meeting of the JUI-F on Saturday that the rulers were not telling truth about Kashmir issue to the people of the country. The JUI-F leaders from all parts of the country participated in the meeting. Maulana Abdul Ghafoor Haideri briefed the participants about the agenda of the meeting.

The meeting in a resolution condemned the Indian act of ending autonomy of Indian Held Kashmir and termed it an open violation of the United Nations resolutions. The resolution said the Indian act in Kashmir is an open challenge for the whole world. It said India was playing havoc with human rights principles by imposing continuous curfew in the held valley.

The Central Shura asked where are the global human rights organisations now and why they can’t see the plight of the people of IHK. It said the solution of Kashmir problem is possible only through the implementation of the UN resolutions.

The meeting expressed complete support to the struggle of Kashmiri people for their right to self-determination. The participants said Pakistani nation is fully prepared to respond if India indulged into any misadventure. They vowed that the JUI-F workers will not hesitate to give any sacrifice for the defence of the country.

Meanwhile, Foreign Minister Shah Mehmood Qureshi called up the United Nations Secretary-General Antonio Guterres and informed him about the plight of Kashmiri people and asked him to play role for resolution of the issue through the UN resolutions.

Qureshi said the Indian government was even mistreating its own people and not allowing the opposition leaders to visit IHK to assess situation there. He said the incident at Srinagar Airport where opposition leaders led by Rahul Gandi were not allowed to enter Kashmir and they were forcibly made to return to Delhi exposed the Indian fascist and extremist attitude and division within India over the issue.

He urged the UN chief to intervene to protect the lives of innocent Kashmiris and visit both sides of the Line of Control to assess the situation personally.