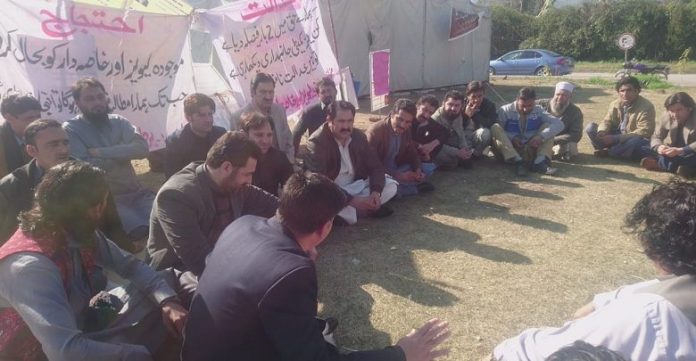 PESHAWAR: The Levies and Khassadar personnel of Bajaur tribal district are staging a sit-in outside the National Press Club in Islamabad for the last four days to pursue their demands.

The main demand of the protesters is restoration of the Levies and Khassadar personnel who were sacked in 2008-09. Suleman, the leader of the protesters, said while talking to TNN that hundreds of Levies and Khassadar personnel were removed from their jobs in 2008-09 over trivial issues. He said the sacked officials knocked the door of the courts and three times the courts decided in their favour.

Suleman said despite a court order regarding their restoration in 2017, the district administration has not taken any step for the restoration of sacked personnel. He said they were forced to held protest after trying to utilise all other means to convince the government to accept their genuine demands.

Suleman said the court had ordered the district administration to form a committee for restoration of the sacked employees. He alleged that only those officials were restored on jobs who paid bribe to the committee members including Levies Superintendent Sultan and clerk Zahir Jan. He alleged that four personnel have been restored after paying bribe, while 150 others, who have refused to pay bribe, are still jobless.

Participants of the sit-in demanded Prime Minister Imran Khan, elected representatives of the area and the district administration high-ups in Bajaur to restore the sacked employees. They said they are facing a lot of difficulties after losing their jobs and finding it difficult to make ends meet. They said the Levies and Khassadar personnel have offered many sacrifices for the country and will never hesitate to offer more sacrifices. They said they are running from pillar to post to secure their restoration and implementation of the court orders, but no one is coming forward for their help. They said they will continue their sit-in if their demands were not accepted. They lamented that no high-level official visited them to enquire about their issue despite their four-day sit-in.

The district administration officials have not commented on the allegations of the sacked Levies and Khassadar personnel.