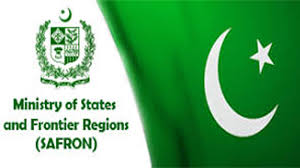 PESHAWAR: Ministry of State And Frontier Regions (SAFRON) has conveyed the Federal Cabinet decision to Khyber Pakhtunkhwa to look after fate of 57000 administrative staff of tribal districts as well salaries of Levies and Khasadar forces.

It said that before the merger the funds were used through the Ministry of Safron and Fata Secretariat will now be directly released to the provincial government.

It was further added that the provincial government shall ensure salaries payments and other benefits of 11704 Levies personnel and 17965 Khasadars recently merged with the Khyber Pakhtunkhwa Police department through a notification within six months.

After the transfer of the allocation, the provincial government shall ensure the payment of salaries and other obligatory expenses including terminal benefits of the 57000 administrative employees and attached directorates.

According to experts, it will be a huge burden on the provincial exchequer, in case the federal government failed to provide three per cent share in the National Finance Commission award for the tribal merged districts.

NFC refers to the distribution of financial resources among the provinces of Pakistan by the federal government every year. Prime Minister Imran Khan wants all four provinces to give three per cent share of the National Financial Commission (NFC) award to tribal districts. “I can assure you that Punjab and KP will pay their due share because PTI is in power there,” he said while addressing a rally in District Bajaur. However, so far only Khyber Pakhtunkhwa and Punjab has expressed the agreement to provide the 3 per cent share to tribal districts.