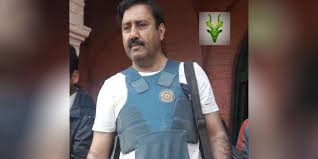 PESHAWAR, 24 March: Former SSP Peshawar, Sajjad Khan has been awarded the coveted President Police Medal for his valor and bravery he showed while responding to the militants’ attack on Agriculture Training Institute, Peshawar in December last year.

The Peshawar police led by SSP Sajjad Khan was widely commended and appreciated by public circles for its quick response to the call of duty. Burqa-clad terrorists had stormed the hostel of Agricultural Training Institute (ATI) on December 1, 2017 killing nine people including six students and injuring many more. All the three attackers were killed by the timely action of police and the army.

Analysts and commentators believed that had police and army not taken quick action against the militants, there would have been more human casualties in the attack.

The SSP was photographed in sleeping suit while wearing a bullet proof jacket and participating in the operation against the terrorists. The photograph went viral on the social media, resultantly large number of people poured praises on the senior police officer for his bravery. Public circles had urged the government to announce gallantry award for the officer.

Later, in an interview with a media outlet, Sajjad Khan had said that he was on leave when he received the news of militants attack on the Agriculture Training Institute. “When I received the call, I didn’t remember how did I manage to come and reach the site. The only thing in my mind was to control the situation and rescue maximum students and thankfully, I succeeded in my mission to a great extent,” he had said in the interview.

Sajjad Khan was presented the gallantry award by the Khyber Pakhtunkhwa Governor, Engr. Iqbal Zafar Jhagra on the occasion of Pakistan Day at the Governor’s House on Friday.

The coveted Quaid-e-Azam Police Medal was also posthumously conferred upon eight martyred police officials who laid down their lives for the country while fighting against militants.

Apart from the gallantry police medals, presidential civil awards were also given to five individuals for their outstanding contribution in their respecitv fields.

Prof. Dr. Zabita Khan Shinwari and Dr. Bashir Khan were presented civil awards for their contributions in the field of Biotechnology. Presidential awards were also given to Dr. Asifullah in Computer Science field, Dr. Abdus Samad in Archeology field and Khalid Noor for representing Pakistan on different international forums in the field of Martial Arts.