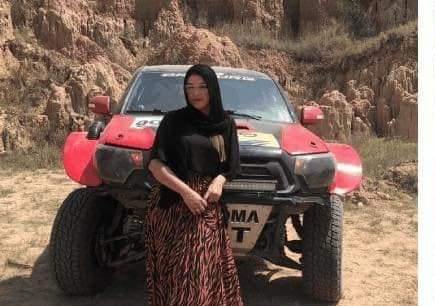 PESHAWAR: Salma Marwat from Peshawar has added another feather to her cap by winning the first 4×4 off-road challenge in Chakwal.

Salma Marwat, using her exceptional driving skills, covered the required distance on a very difficult route in 22 hours, nine minutes and 40 seconds and won the title in the women’s category. Her close rival, Tushna Patel, stood second with a difference of nine minutes and 13 seconds.

The star woman driver said in an interview that she was over the moon after winning another high-level competition. She said she loves motor sports and wants to become best female driver.

Salma Marwat, who is currently living in Hayatabad area of Peshawar, had also won the sixth edition of Hub rally which was held in January this year. She had also won Sarfaranga jeep rally last year.

Cash prizes of Rs1 million were distributed among the winners of the Chakwal rally.

Salma Marwat said she is fond of motor sports from her childhood. She said she always aspired to make it her profession. She also encouraged other women to come out and explore their talent in driving and car racing.

“I am very excited to win this race. I love motorsports and want to be the best at it,” she said.

A cricket tournament was organised at Arbab Niaz Cricket Stadium in Peshawar on Wednesday to create awareness about the importance of polio vaccination.

The ‘Sehat Muhafiz Cricket Tournament’ was organised by the Emergency Operations Centre Khyber Pakhtunkhwa in collaboration with district management.

Khyber Pakhtunkhwa Minister for Sports, Tourism and Culture Atif Khan was the chief guest on the occasion. Atif Khan appreciated programme organisers for organising sports event to raise public awareness on the significance of polio vaccination. He said that participation from parliamentarians, media, bar council, district management and law enforcing agencies indicates that people from cross segments of life are aware of the threat posed by the crippling disease to our children and wants to play their due role in the noble cause.

Atif Khan said that healthy life was the right of every child and it was the responsibility of every citizen to play their part in achieving the goal of polio-free Pakistan.