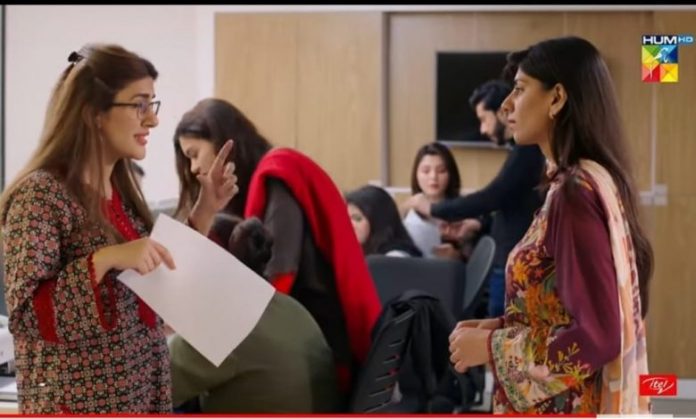 Story of Pakistani serial Sang-e-Mah which recently started airing, revolves around the custom of Ghag. Ghaq is the custom, wherein a man lays claims to a woman to marry her by force. However, even the first episode has made it clear for me and many others that the serial has portrayed the Pashtuns in a bad light.

In the first episode, a woman could be seen asking another colleague about Pashtun drivers in her office. However, the second woman tells her that there were eight ‘Pathan’ drivers in their office not one.

The drama makers could have better addressed the issue by mentioning the name of a driver, instead of saying there were eight Pathan drivers in a particular office. This paints Pashtuns in a bad light. Also it is strange to paint drivers in one office as Pashtuns. There could have been Pashtuns in other seats in that office, whom the woman could have asked about Ghag. Besides it is also sad to see the way, Pashtuns have been portrayed on the basis of Ghag.

On the other hand, there are good and bad customs in every society, which needs to be highlighted. However, painting people in a bad light due to a single custom is wrong thing to do. In the drama, a boy who lays claims on a girl is shown wearing a cap, usually worn by the Pashtun Tahaffuz Movement chief Manzoor Ahmed Pashteen. This portrayal is tantamount to further adding to the oppression of an already oppressed and marginalized people.

Why real issues of Pashtuns are not subject of such dramas

Sang-e-Mah also shows a woman taking up gun to face the difficult situation of her life. Even the way, this woman talks to her daughter, paints Pashtun women in bad light.

If someone is really interested in showing Pashtuns, then one could portray the wrongs committed against them in more than 2 decades long war. One can show the missing sons of Pashtun women and their problems. Also one can show the women and children dying and injured in landmines. One can also ask why the people living in tents away from their homes and difficult lives of people in tribal areas are made subject of such serials. Why the deaths of women and children due to absence of health facilities and schools are not shown.

However, these issues will never be highlighted as such a portrayal will lay bare to the world, the difficult lives of Pashtun people.

At one hand, Pashtuns are portrayed as chowkidar and stupid while on the other hand language used in the drama are enough to make people apprehensive about tribesmen. Besides, Pashtuns have always to be defensive regarding their profiling.

What experts say about the stereotyping?

Prominent journalist Syed Talat Hussain during a recent conference in Islamabad when asked about the profiling of the Pashtuns said that it was wrong to always show an entire people as chowkidars.

He said that Pashtuns were now in field of life. Regarding terrorism, he said that terrorist could be from any ethnicity and it was wrong to link terrorism with Psahtuns.

Regarding linking terrorism to the Pashtuns, Mr Hussain said that media coverage was responsible for this perception. “In reality, people in tribal areas suffered greatly due to terrorism,” he said. On the other hand, these sufferings have not been properly highlighted in national media.

Recently an actor mocked Pashtuns in an event in UAE; however, he had to apologize after strong reaction from a journalist.

People of many ethnicities including Arabs, Uzbeks, Tajiks, Sariaki, Hindko, Urdu, Balochs were among the terrorists and only signaling out Pashtuns was a grave injustice to them.

On the other Ghag though an old custom, is in these days almost non-existent. I think instead of make a serial on a non-existent custom, one should better make a drama about problems faced by tribesmen. Perhaps such a portrayal would lead to at least some respite in their difficult lives.

However, I think Sang-e-Mah has painted Pashtuns in a bad light due to an outdated custom.