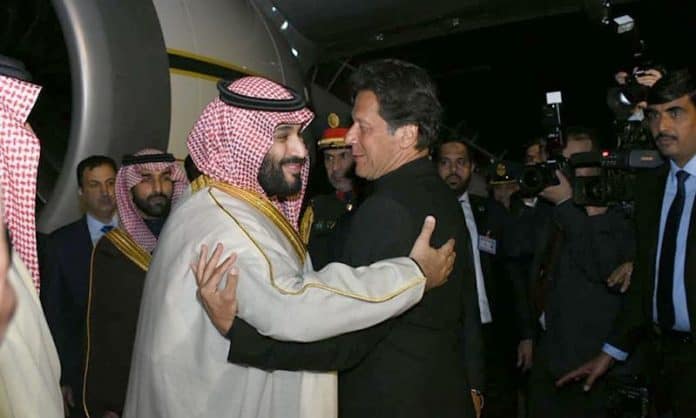 PESHAWAR: Saudi Arabia and Pakistan on Sunday signed memoranda of understanding (MoUs) worth $20 billion investment in Pakistan as Crown Prince Mohammed bin Salman received a historic welcome on his arrival to Islamabad.

The agreements were about cooperation in the fields of energy, petrochemical, sports, tourism and other sectors.

Speaking at a dinner hosted by Prime Minister Imran Khan at the PM House, Mohammed bin Salman said with the signing of $20 billion (MoUs), the bilateral cooperation would further grow in the coming months and years. He said Saudi Arabia wants a strong Pakistan. He said the investment will prove beneficial for both the countries.

The crown prince said Pakistan will move forward in the leadership of Prime Minister Imran Khan.

Imran Khan said Saudi Arabia and its people lived in the hearts of Pakistanis. He thanked MBS for financial support to Pakistan.

During the banquet, Imran Khan requested the crown prince to allow Pakistani Hajj pilgrims to undergo immigration at the three major Pakistani airports before leaving for Saudi Arabia for their convenience. He also requested to address the hardships of the Pakistani labourers working in the Kingdom and Pakistani prisoners. The crown prince said Imran Khan should consider him the ambassador of Pakistan in Saudi Arabia. He promised to look into the matter as it is very hard for him to ignore Imran Khan’s request.

The PM and MBS had one-on-one meeting at the Prime Minister House after their arrival. The meeting was followed by inaugural session of the Supreme Coordination Council, co-chaired by the two leaders of their delegation.

Earlier, on his arrival at the Nur Khan Airbase, MBS was offered a historic welcome. Imran Khan, his cabinet members and Army Chief General Qamar Javed Bajwa arrived at Nur Khan Airbase and received the Saudi crown prince. Imran Khan himself drove the car of MBS to the PM House where a red-carpet welcome and 21-gun salute was presented for the visiting dignitary.

This is the first official visit of Mohammed bin Salman to Pakistan since his elevation as crown prince in April 2017. During the visit, MBS will also meet President Dr Arif Alvi and Army Chief General Bajwa.

After Pakistan, MBS will travel to India and China.