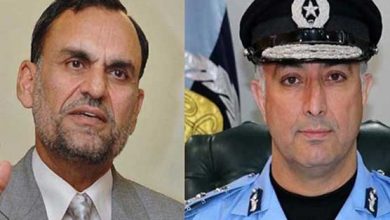 ISLAMABAD: The Supreme Court of Pakistan on Wednesday rejected Minister of Science and Technology Azam Swati’s apology in the Islamabad IG transfer case.

Hearing a suo moto notice against Azam Swati, Chief Justice Mian Saqib Nisar remarked that the minister could be tried under Article 62 (1)(f).

The chief justice observed that the minister was an elected representative and enquired if this was the right way to behave with the people.

He questioned how a public official could have arrested women over such a petty issue and observed that why should not make an example of the minister.

The bench enquired what action was taken against the minister by his own party. The chief justice also expressed his displeasure and remarked that the prime minister has transferred IG Islamabad over a phone call. “Why should not the court summon the prime minister for an explanation,” Chief Justice Saqib Nisar asked.

He said he didn’t even want Swati’s money for the Supreme Court’s Diamer-Bhasha and Mohmand Dam Fund.

Swati is charged for using his influence in transfer of Islamabad IG Jan Mohammad after Swati’s son registered a case against a family, from Bajaur tribal district but living in Islamabad, for trespassing on his land.