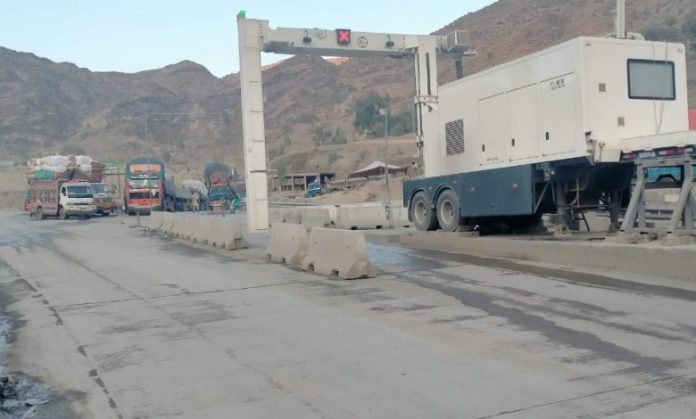 PESHAWAR: Some clearing agents in Torkham have said that there is no mention of scanner at Zero Point in the Customs Export Policy. However, they say if a scanner is installed for imports, then the policy allows it.

The customs clearing agents said over 60 vehicles used to bring retail goods through Torkham border on daily basis, but it has reduced to four or five vehicles only. They said this reduction in trade is causing loss to national exchequer, importers and other people. They said the products of Pakistan are reducing in the Afghan markets and replaced by products of other countries, which is not a good sign for the industries of Pakistan.

The customs clearing agents said the scanner installed in Torkham remains out of order most of times. They said installation of scanner for exports is illegal as there is no place for such scanner in export policy. He said the number of vehicles bringing retail goods to Pakistan has reduced massively due to this practice and exports are also being impacted. They said the national exchequer, industry, traders and workers are the ultimate sufferers of this policy.

The clearing agents alleged that difficulties are being created with installation of scanner for exports. They further alleged that the conduct of staff appointed with the scanner was not satisfactory. They said the bus stand don’t allow transporters to put more than specific weight on their vehicles due to which they are also enduring losses. They said the government needs to review the policy of installation of scanner for exports.

It has been argued that review of the policy will boost Pakistani exports and industries which would ultimately create more job opportunities and the overall impact on Pakistani economy would be good.

Some agents are of the view that Customs officers from Islamabad have been appointed at Torkham who are not properly communicating with the local traders. They said the local traders also stage protests from time to time to get more facilities at the border. They demanded the government to take practical steps to facilitate the traders to boost Pak-Afghan trade to its true potential.