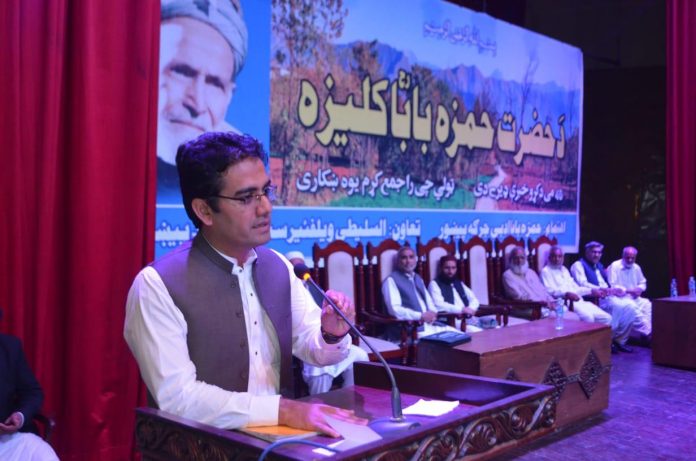 PESHAWAR: Baba-e-Ghazal, Amir Hamza Khan Shinwar was remembered by Pashto scholars, poets and writers on as his 25th death anniversary here at Nishtar Hall on Friday Night. Adviser to Chief Minister on Science and Technology, Kamran Khan Bangash was the chief guest on this occasion.

While paying tributes to Baba, Kamran Khan said the poets are like a mirror for the society where the people can see their reflection. He added poet like Hamza Baba has given a new vaguer to Pashto poetry, especially Ghazal, that is why he is rightly called Baba-e-Ghazal.

He added that the history of Pashto poetry is thousands of years old. And in every age, said the advisor to Chief Minister, poets have worked as a valuable guide for the Pakhtun society. The event was arranged by Hamza Baba literary society at Nishtar Hall in which a large number of Pashto writers, poets, and students participate.

Kamran Khan said that Shinwari not only promoted Pashto literature through his writings but also left an indelible mark on Urdu and Persian poetry. It is a matter of pride for all of us the Pakhtun have a poet like Hamza Baba, whose poetry is liked by the people of all age.

During the event, famous Pashto singers and musicians have given voice to a number of Hamza Baba poets and ghazals and enthralled all those people present in the hall. Hamza Baba was a great Sufi in addition to author of over 40 books both in Pashto and Urdu. He said that people would continue to benefit from the thoughts and inspiring poetry of the Sufi poet.

Noted writer Prof Aslam Tasir  Addressing the event, he said Hamza Baba influenced a generation of poets and writers and had his school of thought because of his extensive study and scholarship on several disciplines.