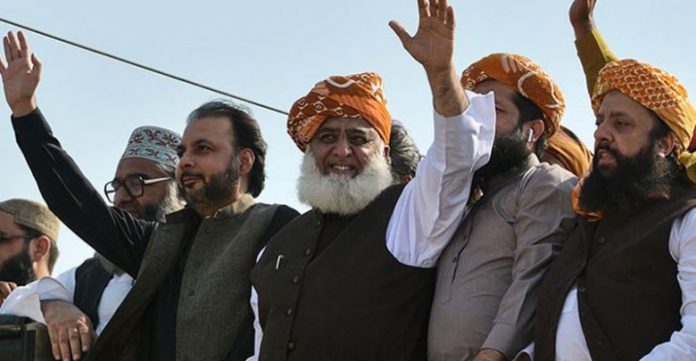 PESHAWAR: In the wake of JUIF’s ‘Azadi March’, it has been decided to close all private schools in Islamabad tomorrow (Thursday). The March, under the leadership of Maulana Fazlur Rehman, is currently on its way to Islamabad and scheduled to reach the capital on October 31.

March participants spent the night in Sabzazar. The participants of the freedom march had breakfast with Biryani, naan chana and tea in Sabzazar of Minar Pakistan in Lahore and now they will leave for Gujranwala shortly.

The March that will arrive in Islamabad on October 31, has decided to shut down the federal capital’s private schools. Secretary Private Schools Association Abdul Waheed says all Islamabad’s private schools will remain closed tomorrow for a sit-in.

‘Govt is worried even before the arrival of ‘Azadi March; to Islamabad’

PESHAWAR: Jamiat Ulema-e-Islami Pakistan- Fazl central leader Hafiz Hamdullah has said that the government is worried even before the arrival of ‘Azadi March’ in Islamabad. He added the international media has reported that the march participants are in millions.

Talking to the media, Hafiz Hamdullah said, “We will reach Islamabad in every situation. Our protest is against the government who has stolen votes of public.” He said that now those who bring this selected government are also worried and Imran Khan is talking about giving NRO all the time. “He can neither take the National Reconciliation Order (NRO) nor can he give any NRO.” Hamdullah is one of the most staunch critics of the PTI government. His national Identity card was also suspended by Nadra and was stopped to participate in talk shows.