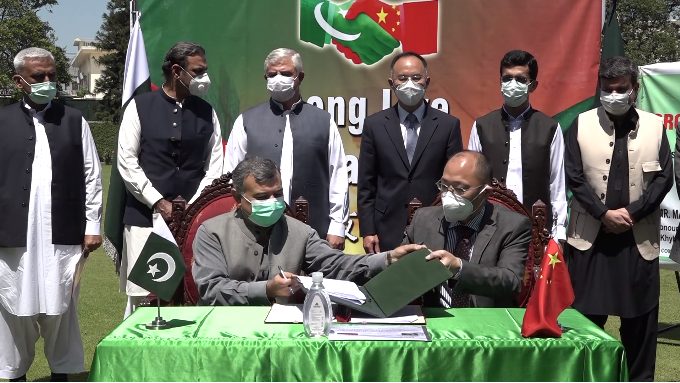 A function in this regard was organised at the Chief Minister’s House Peshawar which was attended by provincial cabinet members Shahram Khan Tarakai, Abdul Kareem, Chairman CPEC Authority Asim Saleem Bajwa, Additional Chief Secretary Shakeel Qadir, administrative secretaries of concerned departments and other high-ups. Secretary KP Elementary and Secondary Education Department and concerned Chinese authorities on the occasion signed a document regarding implementation of the reconstruction project.

Earlier, Chief Minister Mahmood Khan and Chinese ambassador were briefed in detail about different aspects of reconstruction projects in merged districts. In the first phase, 50 schools completely damaged during militancy in Bara tehsil of Khyber tribal district will be reconstructed. These schools include 24 schools for boys and 26 for girls.

Chief Minister Mahmood Khan thanked the Chinese government for its support to the KP government in the reconstruction of damaged schools in the merged districts. He said that China is a time-tested friend of Pakistan, and China Pakistan Economic Corridor (CPEC) Project is a great example of Pak-China friendship. He said the KP government highly appreciates the assistance being provided by Chinese government for the reconstruction of damaged schools in tribal districts.

The chief minister said provision of quality educational facilities to the public was an integral part of his government’s agenda. He said the incumbent government was taking result-oriented steps under a well-devised education strategy to provide conducive learning environment to students. He stated that pragmatic steps were being taken to provide missing facilities in schools besides hiring of thousands of teachers.

The chief minister said that a flagship project of the incumbent government under CPEC portfolio, Rashakai Special Economic Zone would be inaugurated soon which would boost industrial activities in the province and create employment opportunities.