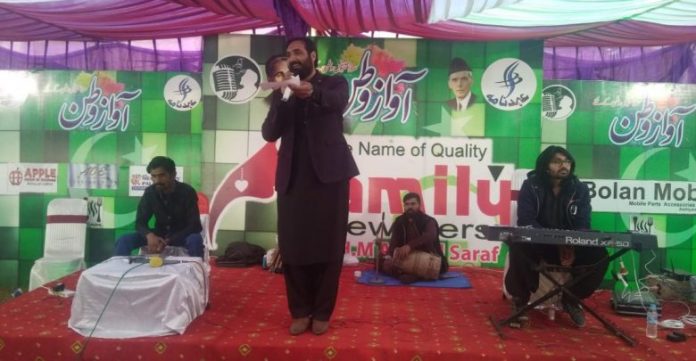 The women participants in the second phase of the competition outshined men as six male and four female contestants were included in the top-10 positon holders. The competition is being organised by the Ehad Nama Social Media in connection with the Pakistan Day celebrations and to discover new talent.

Organisers of the event say the aim of the national songs competition is to show love for our motherland and discover new talent. Male and female contestants from schools, colleges and other fields of life participated in the competition. The participants went through different stages of auditions and now the Awaz Watan competition has reached it final stage after conclusion of semi-final stage.

The area people have appreciated the efforts of the organisers for arranging the national songs contest which has provided a platform to the local singers to show their talent and expressed their love for the motherland. The competitions are part of the Pakistan Day celebrations. Pakistan Day is celebrated throughout the country on March 23 to mark the occasion of Lahore Resolution of 1940 in which a decision was taken in principle by the Muslims of the Sub-Continent to establish a separate homeland.