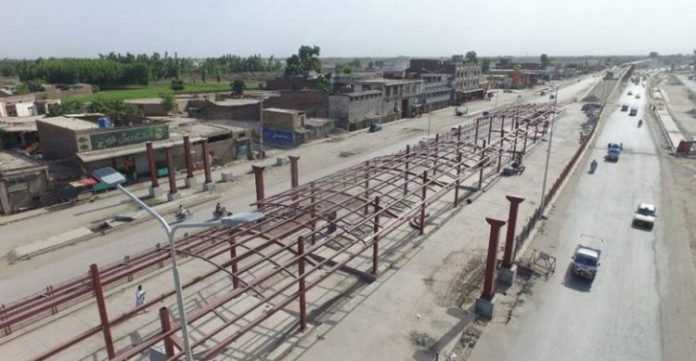 PESHAWAR: The Peshawar High Court (PHC) on Tuesday observed that seeking the date of completion of Bus Rapid Transit (BRT) project is like seeking stars in the sky.

A two-member bench of the PHC comprising Justice Qaiser Rashid and Justice Abdul Shakoor heard a case pertaining to the underground shops which will be affected due to BRT project.

The Peshawar Development Authority (PDA) also submitted reply in the court on which the court sent notices to concerned parties and south reply.

Last week, the business community expressed concern over the delay in announcement of relief to traders affected by BRT project and asked the government to complete it immediately to revive business and trade activities.

Sarahd Chamber of Commerce and Industries (SCCI) President Faiz Muhammad Faizi was addressing media after meeting Peshawar District Nazim Mohammad Asim Khan. Faiz Muhammad said that the provincial government is using delaying tactics in fulfilling its promises regarding tax-exemption and compensation to traders for business losses due to the launch of the BRT project.

Terming the imposition of professional, property taxes, and the issue of trade alliance by the administration of Town-III in Hayatabad Industrial Estates as irrational, he called the move was tantamount to harassment of the business community and asked for immediate its withdrawn.

Two months ago, the PHC while hearing a case about BRT expressed dismay over the failure of drainage system due to BRT project’s excavation, and directed the PDA and Water and Sanitation Services Peshawar (WSSP) to get the sewerage system flowing.

The BRT project in Peshawar was launched during the previous tenure of the PTI government in KP when Pervaiz Khattak was chief minister. Ambitious target of six months was set for completion of the project before the elections, but that did not happen. Now even one year after the elections and PTI again coming into power with even a bigger mandate, the project remains incomplete.