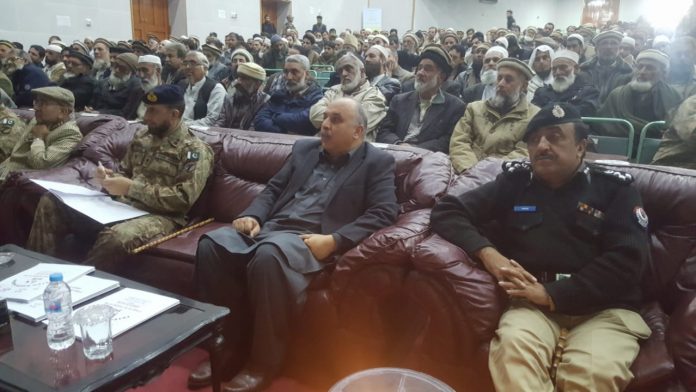 SWAT: A seminar on agricultural reforms was held at the Wadoodia Hall in Saidu Sharif area of Swat, on Thursday.

The seminar was attended by civil and military officials, teachers, students, farmers and other people in large number. Dr Nasir Iqbal and Nadia Bostan from the Agricultural Research Institute in their speeches highlighted the importance of agriculture in the national economy.

The speakers said the plan of the Pakistan Tehreek-e-Insaf (PTI) government to plant a billion trees in the province is worth appreciation. However, they said, had the KP government planted the lotus trees instead of the existing plants then the dream of clean and green Pakistan would have realised. They said the lotus trees would also have improved the economy of the country due to their good worth.

General Officer Commanding (GOC) Malakand Division Major General Khalid Saeed, who was chief guest at the seminar, said in his address that self-sufficiency in agricultural products brings prosperity in the country. He said a better security environment is also required for development of agriculture sector in any country. The GOC said the Pakistan Army supports all the steps taken for the development and prosperity of the country and region at large.

Member National Assembly Saleemur Rehman also addressed the seminar and said such events should be organised on regular basis to create awareness among the people about the importance of agriculture in the national economy. He said the speakers and participants gave valuable input about agricultural development which can be incorporated in the policy-making. The lawmaker said the PTI government in the Centre and KP will take all necessary steps for boosting the agriculture sector.

Different stalls were also set up at the Wadoodia Hall in which the visitors took keen interest.

The visitors said it was a great learning exercise and such seminars and events should be organised regularly to benefit the farmers and give policy guidelines to the policy-makers. They said Pakistan being an agricultural country depends heavily on the agricultural produce. The visitors said prosperity in the country cannot be achieved until the farmer of the country is happy and satisfied.