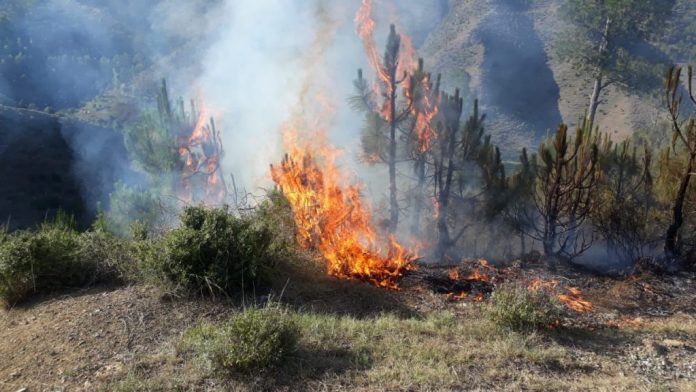 It was further informed that the BTAP plantation in these enclosures sprawls over 97,000 ha area where 800 ha plantation has been damaged by the recent forest fires which are negligible as compared to the existing size of the forests raised under BTAP,” Azhar Ali Khan informed the Committee

Senator Sitara Ayaz in chair inquired the forest department officials of the relevant domains about the losses due to the fire incidents, mitigation measures and reasons behind such frequent hazardous encounters this year.

The Chief Conservator Forest KP further elaborated that most of the fires erupted in the Chir Forests of KP as the Chir Pine needles dropped on the ground were highly inflammable. “Under the forest laws, the local community is bound to assist the forest department while extinguishing the fire whereas the situation is other way around as they merely behave as spectators during the incident.

Mostly, tourists visiting the scenic places in KP were making barbeque and held cooking activities, also some of them threw cigarette butts in the forests which had erupted forest fires. Moreover, some of the rivals or miscreants punished by the Forest Department on violation were putting the forests at fires,” he underscored.

Senator Mushahid Hussain Sayed presented the subcommittee report on the issues of the federal capital under his chairmanship. The sub-committee under his leadership and committee members Senator Samina Saeed and Senator Muhammad Ali Khan Saif conducted field visits to Nullahs (watercourses), Sangjani Landfill site and other places.

The report was adopted by the committee and also forwarded to Chairman Capital Development Authority (CDA) for its compliance.