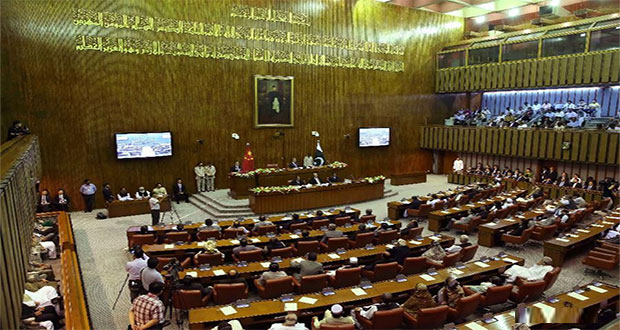 PESHAWAR, 23 September: The Senate passed the Electoral Reforms Bill in the Senate on Friday, apparently paving the way for election of former Prime Minister Nawaz Sharif as president of the Pakistan Muslim League-Nawaz (PML-N).

After passage of the bill with a majority vote, Nawaz Sharif has again become eligible to become president of his party after disqualification by the Supreme Court in the Panama Papers case.

The bill was presented in the Senate after passage in the National Assembly. The PPP Senator presented an amendment in the bill suggesting that a person who is ineligible to become an MNA must not be eligible to become president of a political party. In the voting, the government succeeded in cancelling section 203 of Electoral Reforms Bill with the margin of just one vote.

The Pakistan Tehreek-e-Insaf (PTI) chairman Imran Khan said the bill was amended just to benefit an ineligible person which tantamount to murder of ethical norms.

The Awami Muslim League chief Sheikh Rashid said the ruling party is ridiculing the law and constitution by such legislation. He vowed to challenge the legislation in the Supreme Court.

On the other hand, the government termed the legislation victory of democratic forces.