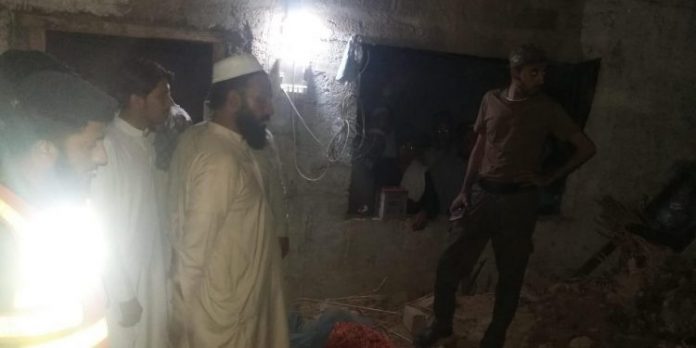 CHARSADDA/MARDAN: Seven people have lost their lives in two incidents of roof collapse in Mardan and Charsadda districts of Khyber Pakhtunkhwa.

In Charsadda, a woman and her two children died as roof of their mud-made house collapsed in Sheikhano Bari Band area on Tuesday. The grandmother of the deceased children also died of cardiac arrest when she came to know about the incident. A girl was also injured in the incident who was shifted to hospital.

The deceased were identified as Ayesha, Salma and Ismail. The bodies and the injured were taken to a local hospital. according to doctors, the condition of the injured girl was out of danger.

In Mardan, four people, including a woman and two children, died when roof of their house collapsed on Monday night.

Local sources said the incident happened due to poor condition of the house in Qudratabad area of Takht Bhai tehsil.

The deceased were identified as 60-year-old Tor Muhammad, his 50-year-old wife and two grandsons, 10-year-old Badroja and six-month-old Abbas.

The disaster response team of the Rescue 1122 immediately reached the incident site and retrieved four bodies from the rubble of the house. The bodies were taken to Tehsil Headquarters Hospital in Takht Bhai.

Three persons lost their lives and three others sustained injuries in a firing incident in Yousafabad area in Peshawar on Monday night, police said.

Armed men opened fire at their rivals and sped away. As a result of firing, three people were killed, while three others, including a passer-by, sustained injuries.

The deceased and injured were shifted to Lady Reading Hospital Peshawar.

Police said the incident was a outcome of personal enmity between two groups. A case of the incident has been filed and further investigation is being carried out and raids conducted to arrest the culprits. No arrests have been made so far.

Earlier, 22 people, including children, received burn injuries when a gas cylinder exploded at the shop of a Nanbai (bread seller) in Dir Colony, Peshawar.

The injured people were taken to Hayatabad Medical Complex (HMC) where the condition of five of them was stated to be critical.