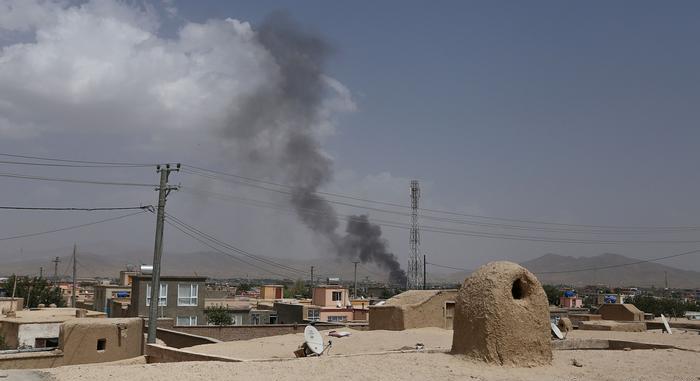 Soon after launching attack in the morning, the Taliban claimed that they had occupied most of the city. The Afghan troops effectively retaliated as they were backed by US attack helicopters and drone aircraft.

Later in the day, the Defence Ministry spokesman Mohammad Radmanish said the Army supported police and the city was now under control of the government forces.

It was unclear how much of Ghazni city was under government control amid conflicting claims from both sides. There were reports that the Taliban fighters had taken control of checkpoints across the city from the police. But the government and the US denied that claim.

Baz Mohammad Hemat, administrator of the Ghazni city hospital, was quoted as saying that at least 14 security forces were killed and 20 wounded in the battle. Provincial police chief Farid Ahmad Mashal said the bodies of 39 Taliban soldiers were recovered beneath a bridge in the southern edge of the city. He claimed that the air strikes called in to quash the offensive also killed dozens of Taliban.

During the clashes, the Taliban insurgents also blocked Kabul-Kandahar Highway.

Ghazni is a volatile region in southwest Afghanistan where Afghan security forces are frequently engaging in deadly battles against the Taliban.