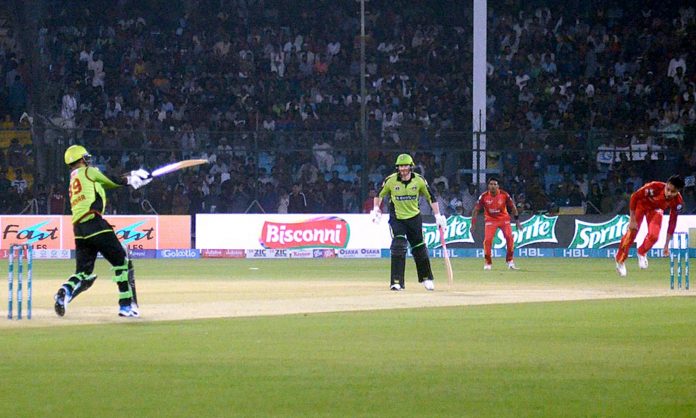 PESHAWAR: In a spectacular evening which saw several record-breaking performances, defending champions Islamabad United crushed Lahore Qalandars by 49 runs in the first home match of the fourth edition of the Pakistan Super League (PSL) in Karachi on Saturday.

Islamabad United after being invited to bat first fired on all cylinders and posted a mammoth target of 239 after losing just three wickets. Although Luke Ronchi fell on first ball of the game, but afterwards, it was an all-out onslaught. Cameron Delport was the pick of batsmen for Islamabad who scored unbeaten 117, while Asif Ali scored unbeaten 55 and Walton scored 48.

For Qalandars, Shaheen Shah Afridi, Lamichhane and Wiese took one wicket each.

Things were not easy for Qalandars in the massive chase and with regular fall of wickets the asking rate kept mounting. They managed 189 runs for the loss of nine wickets. Sohail Akhtar was top scorer with 75, while Fakhar Zaman scored 38.

Faheem Ashraf showed Qalandars how to bowl on a flat surface. He conceded just 19 runs in four overs and took six wickets, while Shadab Khan and Rumman Raees also took one wicket each.

Few records were broken in match. 238 posted by United is the all-time highest score of PSL posted by any team, while 16 sixes were hit during the inning which is also highest for the PSL. Asif Ali’s 17-ball fifty was the joint fastest in PSL, while Shaheen Shah Afridi conceded 62 runs, the most in a PSL inning. The hundred by Delport in 49 balls was also fastest in the PSL. And Faheem Ashraf’s performance of 6/19 was the best in all PSL matches.

Delport was declared man of the match for his outstanding batting. He said after the match that it was first time he played in Karachi and it was a wonderful experience.

United with 10 points are now safely in the play-offs, while for Lahore the situation is very complex. Lahore now must win their last game tomorrow (Monday) against Multan Sultans and then hope Karachi lose their next two games. If none of these two things happened, Qalandars will again be out without qualifying for playoffs. Karachi will face Quetta Gladiators today (Sunday).