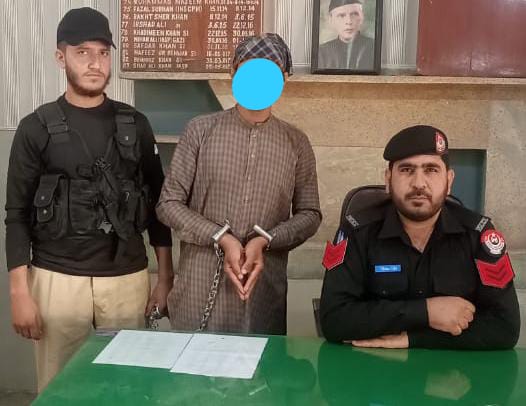 NOWSHERA: Nowshera Police have arrested an accused allegedly involved in sexual assault on a six-year-old girl.

Police said a resident of Akora Khattak lodged a complaint along with his six-year-old daughter that he was going to mosque for prayer when he noticed cries of his daughter from a nearby under-construction house. He alleged that when he went there, he saw the accused, Sher Khan, trying to sexually abuse his daughter. He said the accused escaped from the scene after seeing him.

Police said the accused is a neighbor of the victim girl. The accused was immediately arrested by the police and produced in a local court which granted a two-day remand. Further investigation into the case is underway.

Several incidents of rape and sexual assault had been reported in Nowshera recently and the incidents are regularly happening despite arrest and punishments to culprits.

On February 26, two accused allegedly gang-raped a 13-year-old boy in Akora Khattak on pretext of filming a TikTok video.

According to police, the father of the victim boy said the accused took his son to a place by telling him that they will make a TikTok video and upload it on social media. However, he alleged, the two persons gang-raped his son and also filmed his indecent video.

Police said the accused fled the scene leaving behind the child in injured condition. Due to timely action by police, the accused were arrested within two hours of the filing of complaint.

In the year 2020, crime ratio in Nowshera remained high, and particularly the incidents of sexual abuse remained a nuisance for law enforcement agencies and society at large.

According to sources in Nowshera Police, 29 children were sexually assaulted in Nowshera during 2020, including seven girls and 22 boys. Five cases related to kidnap for ransom were also reported, while 152 people, including 45 women, were murdered.

The sources said most of the accused involved in cases about sexual abuse of women and children were arrested, but few of them got punishment.

According to media reports, 184 cases of sexual abuse of children were reported in Khyber Pakhtunkhwa till October 2020 and four of them were murdered after abuse.