The event, as always, is attended by not only students of other educational institutions of Peshawar as well as other regions of KP, but every year dignitaries, bureaucrats and every person with a taste for literature and liberal arts. The three days performance is the results of more than a month of hard work by the students and the staff members of the college.

In previous years, the Society performed Hamlet, Macbeth, A Medley of Julius Caesar and Anthony & Cleopatra which were considered as among its most excellent performances by not only students of other institutes but experts of literature and drama as well.

William Shakespeare is a dramatist who requires no introduction whatsoever as he is the most performed dramatist in human history.  Othello is one of his four great tragedies and thus a pillar of what most critics take to be the apex of Shakespeare’s dramatic art. Othello is unique among Shakespeare’s great tragedies. Unlike Hamlet, King Lear, and Macbeth, which are set against a backdrop of affairs of state and which reverberate with suggestions of universal human concerns, Othello is set in a private world and focuses on the passions and personal lives of its major figures. Indeed, it has often been described as a “tragedy of character”.

Othello is one of Shakespeare’s most startlingly contemporary plays – a masterful depiction of a life torn apart by prejudice. Venice; a western colonial power employs newly-married Othello, a Muslim general, to lead their army against the impending Turkish invasion. The strain of fitting into a society riven by discrimination and fear soon take their toll. Manipulated by Iago, Othello’s life quickly unravels as he turns on everything he holds dear.

The Edwardes College Peshawar Stage enjoys a historical prestige and has produced talents such as Pritvi-Raj Kapoor in the past. Almost every year, the society transforms students with little or no experience of acting into talents of a caliber fit for professional theatre acting.

The Society has performed numerous literary and dramatic masterpieces. More recently, it enacted Sophocles’ classic Antigone; a stage adaptation of Victor Hugo’s novel: Les Miserables; and, a Shakespearian medley: combining Julius Caesar and Anthony and Cleopatra which was a one-of-its-kind performance unique to the Edwardes Stage since nowhere in the world had a medley of this kind been ever performed. The last performance at Edwardes Stage was the enactment of the murder-mystery The Mousetrap by Agatha Christie. 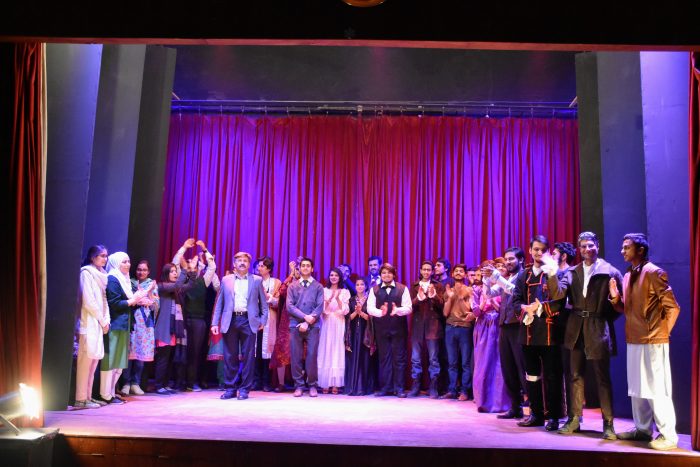 The Edwardes Dramatic Society believes that stage is a remarkable platform for polishing students: making them more vocal, confident and more refined. The Society also holds that the Stage provides a window through which human society and psychology could be dissected and understood. This year, through the enactment of Shakespeare, the Edwardes Dramatic Society explores the theme of jealousy – for which Othello is renowned – and presents the self-destructive nature of both devious manipulation and unfounded jealousy.