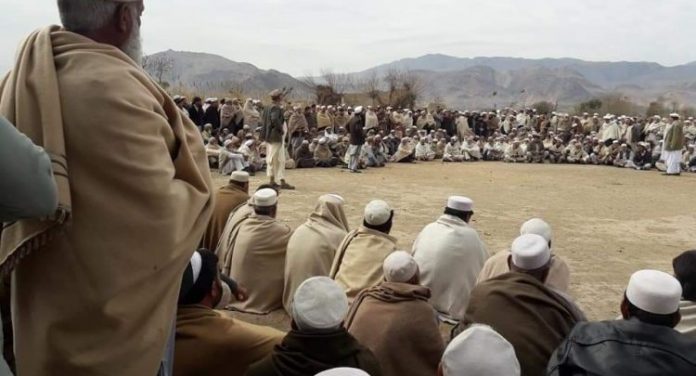 BARA: The members of Shalobar tribe on Wednesday held a Jirga against the razing of house and setting fire to their vehicles by the rival tribesmen over a land dispute in Secretary Pull area of Bara, Khyber tribal district.

The Shalobar tribesmen said members from the rival tribe demolished a house and set on fire their vehicles over a land dispute two days ago. The Jirga members decided that Shalobar tribe will fully observe Tiga (ceasefire) till the end of the deadline as requested by the elders of Afridi tribes.

The Jirga participants thanked the elders of Sepah, Akakhkel, Kamarkhel, Bar Kambarkhel and other tribes, Member Khyber Pakhtunkhwa Assembly Shafiq Afridi and others who sat with them for peaceful resolution of the issue. The Jirga decided not to take any retaliatory action and fully probe the issue. It decided that further action will be taken after fully ascertaining the whole issue.

A house was razed, while two motorcycles and a chingchi rickshaw were set on fire over a land dispute in Bara on Monday.

On January 01, a house was razed by a mob over a land dispute in Baizai tehsil of Mohmand tribal district.

Two rival tribes came face to face after the house demolition, but the local police with the help of tribal elders brought the situation under control and managed to keep the situation calm.