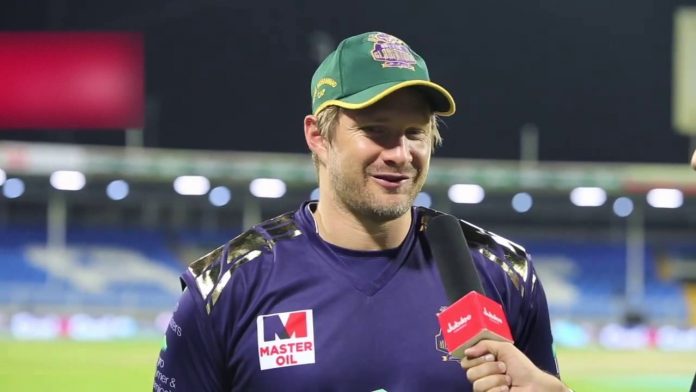 PESHAWAR: In an encouraging development for Pakistani fans of the Pakistan Super League (PSL), the world renowned all-rounder Shane Watson from Australia has expressed readiness to come to Karachi to play the final leg of the mega event.

Shane Watson, who is part of Quetta Gladiators, is instrumental in the current top position held by his team on the PSL points table as the Gladiators batting mostly depends on his batting prowess. Most of the matches won by Gladiators in the fourth edition of the PSL were because of destructive batting of Watson. With Watson’s announcement, Gladiators, the two-time finalists, have now become predominant favorites to lift their maiden trophy this time.

It’s been 14 years since I last visited Pakistan, a place with some of the most passionate fans in world cricket. Can’t wait to give it our best shot in bringing home the trophy with… https://t.co/LVTXgkj0ru

The all-rounder made the announcement on Twitter. “It’s been 14 years since I last visited Pakistan, a place with some of the most passionate fans in world cricket. Can’t wait to give it our best shot in bringing home the trophy,” Watson said.

Earlier, Quetta Gladiators Manager Azam Khan said Shane Watson is willing to come to Pakistan after being convinced by the franchise owner Nadeem Omar. He said Watson will be available for Gladiators encounter against Karachi Kings.

Last eight matches of the PSL-4 including the final would be played at Karachi’s National Stadium. Previously, three matches were scheduled in Lahore, but that had to be shifted to Karachi due to logistical problems caused by Lahore Airport closure for few days owing to tension with India.

Cricket fans in Pakistan were feeling a bit dejected after former South African captain AB de Villiers opted out of the Pakistan leg of PSL due to injury. However, the news of Shane Watson’s arrival has been warmly welcomed and fans on the social media are expressing their jubilation and can’t wait to see him in action in Karachi.

The Pakistan Cricket Board (PCB) Chairman Ehsan Mani has already announced that most of the main foreign players of the PSL franchise will visit Pakistan for PSL matches.

Meanwhile, massive security arrangements have been made in Karachi for the PSL matches as spectators from all parts of the country are expected to come to the mega city to watch the matches.