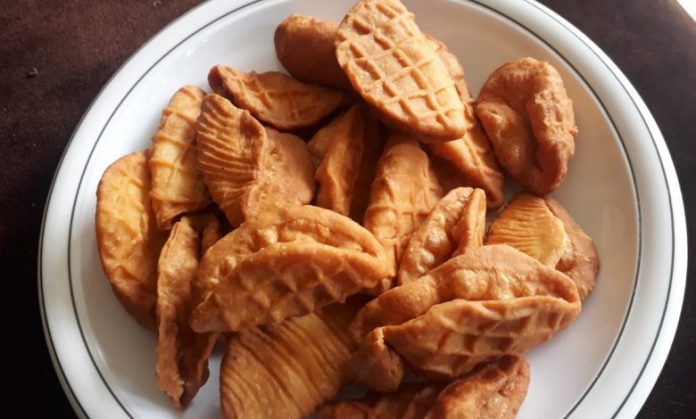 SHANGLA: Various types of traditional food gifts are prepared and shared in different parts of Khyber Pakhtunkhwa. Similarly, in Shangla, the tradition of several food gifts still exists to some extent.

These traditional gifts include Shangla’s special cake, Halwa which is also known as “darpesh” by the elderly people, “kakori” or “Glagoli” etc. One of the most delicious food after the cake is “gunzakhey”.

In some areas like Swat, it is also called “khajur” but the traditional name is gunzakhey which is usually served with tea and is prepared at home on the occasion of Eid and weddings.

On Eids, there is a tradition of sending various gifts to daughter’s house, including gunzakhey, by parents.

How is this traditional gift made at home? A local woman, Hafsa, told TNN that first sugar solution is prepared. Brown sugar can also be used as a replacement of sugar, then eggs in flour and ghee is mixed till everything gets mixed thoroughly. After that small sphere-shape structures are made out of them and later they are modified into small pieces like round bread.

According to Hafsa, the method of giving a final shape to ghunzakhey differs in different areas. In some places these are made in the form of small loaves of bread, but in Shangla’s case, the gunzakhey is made by wrapping it in a peculiar way and then it is deep-fried in a pan. Coconut is also used to improve its taste and make it more crispy. Until recently, its use was high but now its use has decreased due to its difficult method and unfamiliarity with the new generation.

According to Sardar Wajid, gunzakhey is a unique gift of Shangla but there are more than one reasons for its low use.

According to him, now that ready-made items are available in the market without any effort, people prefer them, while the other important reason is that in the past, most of the houses had desi ghee and desi eggs, which also tasted good. It used to be very unique, but now it is not being considered that tasty due to a lack of desi ingredients.

Sardar Wajid says they still make gunzakhey on special occasions, but not as often as before.

“Increase in the number of diabetics is also one of the reasons for the decline in the use of gunzakhey because of the use of sugar in it.”

The new generation likes fast food, which is not good for health as compared to gunzakhey and other traditional food gifts.

In this regard, Dr Muhammad Younis says that fast food, also commonly called junk food, is not cooked properly but is fried, and the most common changes that fried foods bring to the human body include obesity and high blood pressure.

Muhammad Younis says traditional food gifts are still used but not as regularly as they were some years ago.

“Not fast food, but bakery products must have taken the place of traditional foods.”