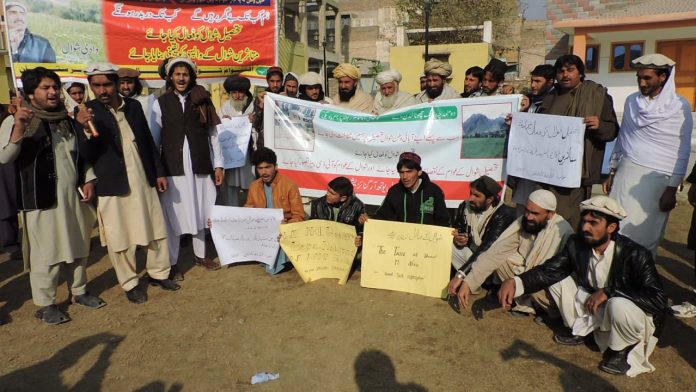 BANNU: The displaced people hailing from Shawal area of North Waziristan tribal district on Friday held a protest demonstration in Bannu against excluding Shawal from the new provincial constituencies.

Shawal area of North Waziristan, comprising a population of tens of thousands, hasn’t been included in the new provincial constituencies of the tribal districts for the upcoming provincial elections due to which the people from the area will not be able to cast vote in the provincial polls. A large number of people, including students, took part in the protest in Bannu.

Participants of the protest called upon the government to revive all activities in Shawal and include it in the new constituencies. They said repatriation of all the displaced people from Shawal must be completed on priority basis and local people must be appointed on vacant posts in Shawal tehsil after its revival. They said the people of Shawal must also be compensated for damages during militancy and military operations.

The protest by the youth of Shawal came two days after the Election Commission of Pakistan (ECP) notified share of tribal districts in the KP Assembly.

Under the notification, the newly-merged districts of the province secured 16 provincial assembly seats. The ECP notification says the delimitation of constituencies is based on 6th Population Census conducted in 2017. Khyber and Bajaur districts are topping the list with three MPAs seats each. Both the districts are the most populated districts among seven tribal districts with a population of 1,093,684 and 986,973 individuals respectively.