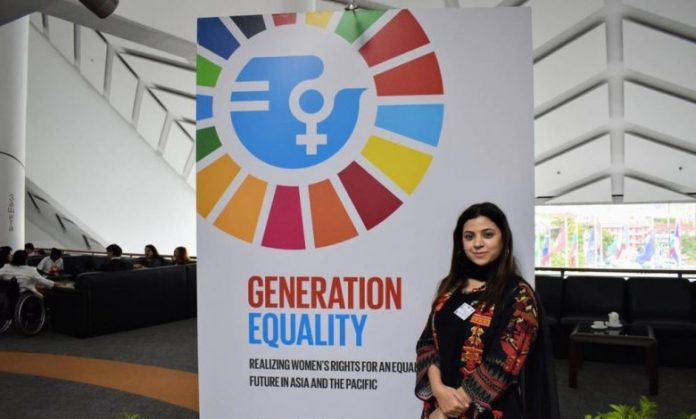 When Shawana Shah was in college, she saw her cousins and friends barred from pursuing their studies. Those days there was little interest in girls’ education while early age marriages were on the rise. These conditions pushed Ms Shah, a resident of Peshawar, into working for women rights.

Ms Shah is currently working as programme manager with the ‘da Hawwa Lur’ or the daughter of Eve. Da Hawwa Lur is a non-governmental organization and works on women rights and transgender.

She was in school in 2017, when security situation deteriorated amid spike in terrorism incidents. Ms Shah then started writing poetry. The poems brought her identity and were highly appreciated. Since then she has been raising voice for women’s rights.

“At the Da Hawwa Lur we are working in an organized manner for women rights,” she said. Ms Shah said that they have launched a psycho-social support initiative for women and transgender victims of sexual and physical violence.

She said that they provide psycho-social support to women and transgender who do not means to consult a psychologist.

Ms Shah and her organization have also tried to raise awareness regarding mother and child health. “Still there many families in rural areas where little attention is paid to the health of pregnant women,” she said.

However, she said that youths should not be made to sit in seminars and other events as token representations. “They should come up with solutions for issues they are facing,” she said. Ms Shah said youth participation in the event was very necessary.

Ms Shah said that pandemic has led to an increase in women’s problems. Besides, she said that issues like child marriages, school dropout, domestic violence and poverty have also increased. “Pandemic has greatly affected the hard work of human rights and non-governmental organizations,” she said.

She said that they need to work very hard to get those girls who quit education due to the pandemic back into schools.

The figures are worrying. An Aurat Foundation report stated that 2297 women were subjected to violence in KP in 2020. Besides, 624 women were murdered. The report blamed the lockdown for domestic violence. It said that the pandemic forced most males to stay at home. “Out of jobs, the males vented their frustration by torturing women,” the report added.

Ms Shah said that often women think small steps are insignificant. “I want to convey to them that the journey of thousands of miles starts with a single step,” she said.

Ms Shah said that women should believe in themselves and work hard to achieve their goals.