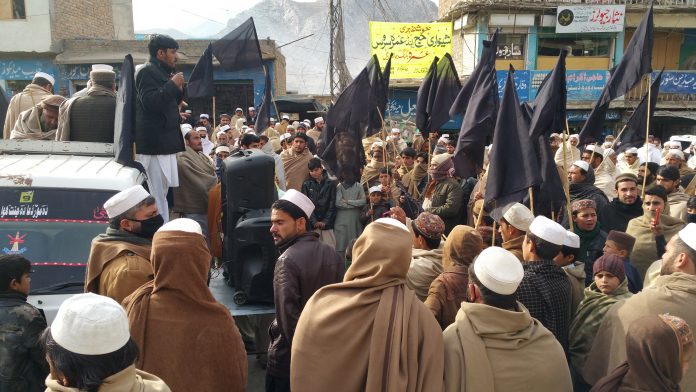 LANDIKOTAL: Members of Khoga Khail tribe staged a protest demonstration against the alleged occupation of their land property by authorities near Torkham border in Landikotal and warned of closing custom and other offices if their demand was not fulfilled by January 23.

The protesting tribesmen accused that National Logistic Cell (NLC) and Federal Board of Revenue of grabbing their property in violation of the contract which the tribal elders had signed with them. The protesters blocked the Landikotal-Torkham road for traffic.

A large number of political workers and locals participated in the protest rally. They were  carrying black flags and holding placards inscribed with slogans in favour of their demands.

“For the service of local people, we provided land free of cost for construction of a hospital, college, girls school, a grad station etc. “But NLC is in Torkham is using the land for business purpose and therefore, we want our legal share in the profit generated through the our land.” the protestors said.

The protester wanted to march to Torkham to record their protest but they were halted by the Khasadar and Levies forces at Landi Kotal bypass road, where they staged a sit in and closed the Landi Kotal-Torkham road for all kind of traffic.

However, after they got assurance from security force’s representative that their grievances would conveyed to the high-up, the protesters dispersed peacefully and the raid road was reopened for movement.