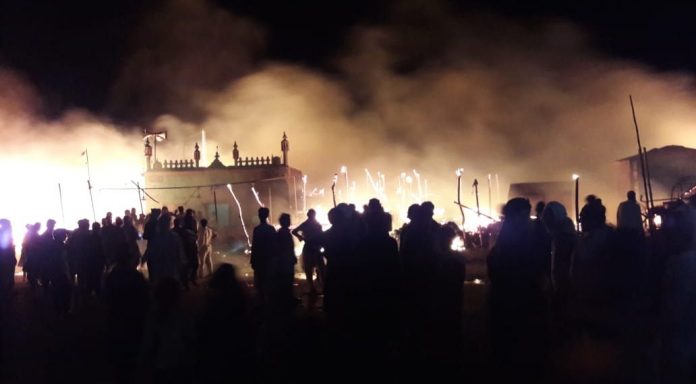 LAKKI MARWAT: Dozens of shops were burnt down due to fire in Pezu market of district Lakki Marwat on Tuesday. TNN correspondent, who was present on the spot, reported that so far, the reason behind the sudden fire could not be ascertained.

It was added that the local people tried to extinguish the fire, due town which it could not be subdued on time, until, it burnt down dozens of shops. On the other hand, strong winds have further foiled the rescue efforts while the government machinery couldn’t reach to spot to help in the rescue operation.

It is pertinent to mention here that the marked was also earlier engulfed by fire but so far it reason couldn’t be ascertained. The shopkeepers have also staged protest, a few weeks back.

A man was killed by lightning strike Takht-e-Nusrat area of district Karak on Tuesday. Local people said that another man was also injured in the incident. The man died in the incident was identified as 20-year old Zia Ur Rahman.

KOHAT: A man was gunned down while a traffic warden and a passer-by woman were injured in the incident. Sources added Naveedullah, resident of Lal Mela, allegedly opened fire on his rival, Sohail Nawaz, in Kohat city, leaving him dead on the spot.

A woman from Mandakhel village caught in the firing and suffered bullet injuries. To avoid arrest, the accused fired at a traffic warden, Muhammad Yousaf. The cop received a bullet in his leg and was injured. However, he overpowered the accused along with the weapon used in the crime.

The injured and body of the slain young man were shifted to the hospital. A case was registered and investigation launched. Kohat Region Deputy Inspector General Tayyab Hafiz Cheema and District Police Officer Wahid Mahmood visited the hospital and inquired after the injured traffic police warden.