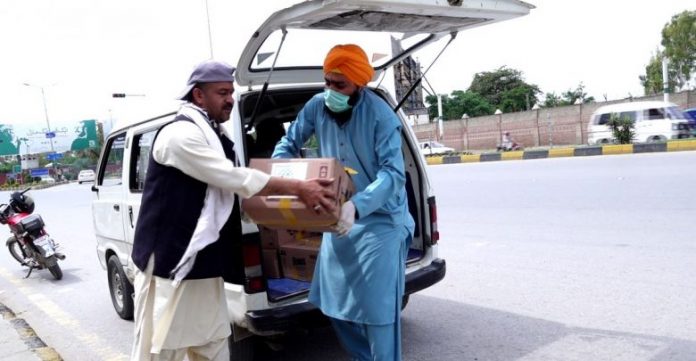 PESHAWAR: Coronavirus has impacted almost all sectors of life and labourers and daily wagers are the most affected as they have lost their source of income.

Even during this difficult situation, there are some people who are serving the humanity without any discrimination. One such activist is Dr Jitender Singh, a member from Sikh community in Peshawar, who is serving people selflessly.

Dr Jitender Singh forms ration packets at his home and then distributes among the needy people in Peshawar. He said he buys all the items from market and his family members help him in making ration packets. He said he follows all the standard operating procedures (SOPs) for preventing the spread of coronavirus while buying and packing goods.

Dr Singh said the people who had previously donated for his team are now unable to donate mainly because of continuous lockdowns and increasing financial problems of those doing different jobs and businesses. He said currently his team is facing some problems as they are doing almost everything on self-help basis. He said the increasing prices of food items are also causing difficulties for his team. He said the ration pack which was previously made with Rs3,000 now costs Rs5,000.

Despite all difficulties, Dr Singh is in lifted spirits and he is continuing his work with the passion of serving humanity. He said he gets pleasure and peace of mind while helping the needy people. He said all deserving people must be provided help without any discrimination.