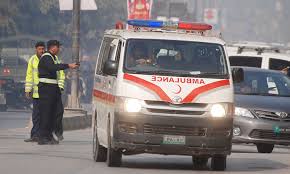 CHARSADDA: Six people were killed and two others were injured in firing between two groups over a domestic dispute in Charsadda on Sunday.

Police said the incident happened in Rajar area and both the groups are cousins. The two groups traded fire on Sunday in which a couple, Qalandar Shah and Gul Rukh, from one side and three brothers, Sabir Shah, Ahmed Shah and Anwar Shah, and a woman, Aqila from the other side were killed. A passer-by child was also injured in the firing.

The injured persons were taken to District Headquarters Hospital Charsadda. Police reached the scene of the incident, but no FIR was lodged till filing of this report.

Meanwhile, unknown motorcyclists threw acid on the face of a 17-year-old boy, Idrees in Tajori area of Lakki Marwat.

Idrees was walking in the street of his house when the culprits threw acid on him, which affected his right eye, face and chest. He was taken to Khalifa Gul Nawaz Hospital in Bannu for treatment.

Police have registered a case of the incident and initiated investigation.