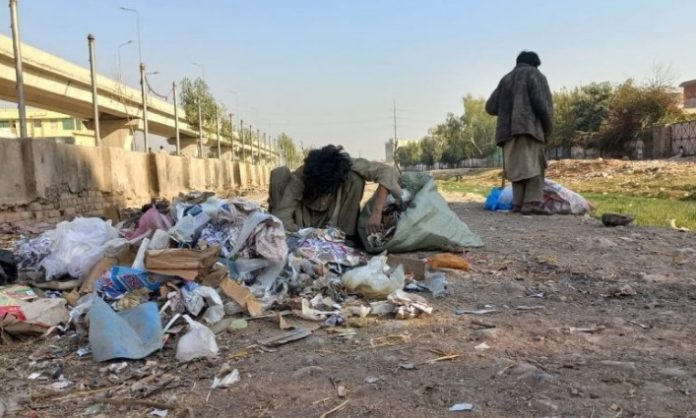 Ahmed was addicted to smoking charas. However, one day a friend told Ahmed about some other drug which will keep him awake and make him feel more alert.

“It will help you with your studies,” the friend told him.

Starting that fateful day, Ahmed gradually sank into the morass of crystal meth abuse.
“I stay awake for three days in stupor and lose my appetite,” he said.

Muhmmad Ahmed, 40, another resident of Charsadda is also undergoing treatment at a private rehabilitation center.

He also experimented with various drugs including, charas, scorpion powder, heroin and finally settled on crystal meth or ice.

His family members admitted him to the rehabilitation center. For days, he was very upset with his family; however gradually started feeling better. “I am on the road to the recovery and returning to real life,” he said.

Role of rehab centers in treatment of drug addicts

There is large number of charas and heroin addicts in Pakistan. However, over past few years, ice addiction is on the rise.

Shiraz Khan, head of a private rehabilitation center in Shabqadar area of Charsadda told TNN that data he has collected showed 84,000 drug addicts in the district.

However, Mr Khan said that 17 rehabilitation centers were working in the district. He said that these rehab centers were insufficient for treating growing number of addicts.

Mr Khan said that his rehab center had capacity to treat only 100 people; however, currently 120 were enrolled there.

“Number of ice addicts is on the rise,” he said. Mr Khan said that Charsadda shared borders with Mohmand district. “Due to this drugs from Mohmand are reaching Charsadda,” he said.
However, he was of the view that there were many reasons for drug abuse. “Social and domestic pressures, company with drug addicts, drug use in family and sexual pleasures are some of the drivers of the drug abuse,” he said.

He runs his rehab center with donations and his own resources. “If government cooperates with us, we can eliminate drug abuse in Charsadda,” he said.

However, he said that courts release many of the drug paddlers due to faulty investigations. Mr Afridi said that at one hand law enforcement agencies were cracking down on drug dealers while on the other hand social welfare department working on the rehabilitation of addicts.

He said that some days back, they picked up a mother and daughter, both ice addicts, and admitted them to a rehab center.

However, he said that the issue could only be eliminated after eradicating the drug paddlers. He said that government was considering the proposal to setting up dedicated centers to treat women drug addicts.

Mr Afridi said that figures of women addicts across the province were not available.

What Charsadda police is doing to control drugs

Details obtained from the Charsadda police under the Right to Information Act 2013 showed that a total of 337 cases of heroin, charas, ice and liquor over past six months.
Police said 401 suspects were also arrested in connection with these cases.

However, police data showed that only one of 337 suspects was sentenced to prison while another was fined. “Trial of the rest is in process,” police said.

A Charsadda police official blamed faulty investigation of drug cases for the increasing drug abuse. He said that they arrest drug dealers at great personal risk; however, they manage to get bails from courts.

“We looked for loopholes in many cases where the drug dealers were released and tried to overcome those,” the official said. However, he said that sill drug dealers manage to walk away freely.

Police official said that the district get its drug supply from Parang Ghar area of Mohmand district, Shakas and Bara areas of Khyber district, Darradamkhel and Karkhano Market.

Charsadda police spokesperson Safi Jan told TNN that they have formed a 45 members strong Narcotics Eradication Team (NET). District Police Officer is heading the NET, setup at direction of KP police chief. He said that NET was also working to raise awareness against drugs. He said that NET officials were visiting educational institutions, mosques, villages and bazaars to raise awareness against drugs.

What is pushing people into drug abuse

Dr Sanaullah who works at the Life Ways Rehab Center said that drug abuse pushes a person into depth of darkness. “It becomes nearly impossible without drugs for the addict,” he said.

He said that availability in Pakistan was easy while the prices were low.

He said that there were several drug dens in districts but people whose say matters keep silent about them. “This is one of the major reasons of drug abuse,” he said.

Regarding, ice he said that an addict needs to increase the drug intake as compared to last time. “This gradually makes people addict,” he said.

He said that treatment duration at his clinic was three months. Besides, medicines, the doctor said, he also used psychological counseling to rid them of drug abuse.
Dr Sana said that the addicts return to normal life after treatment and counseling. However, he said that once they return to their villages, people start calling them “nashai” or drug addict.

He said that family members shared greater responsibility for a rehabilitated drug addict. “They need to provide him with employment and other opportunities to stop his relapse,” he said.

The amended legislation provides for death penalty for ice trafficking and seven years imprisonment for use of drugs. Under the law, those making property and other asset from drug money would be awarded life imprisonment.

Number of drug addicts in Pakistan

On average about 700 people die due to drug addictions on daily basis.

Pakistan Bureau of Statistics in its 2013 report put the number of drug addicts in the country at 6.7 million. The report said that majority of the drugs addicts were in KP.