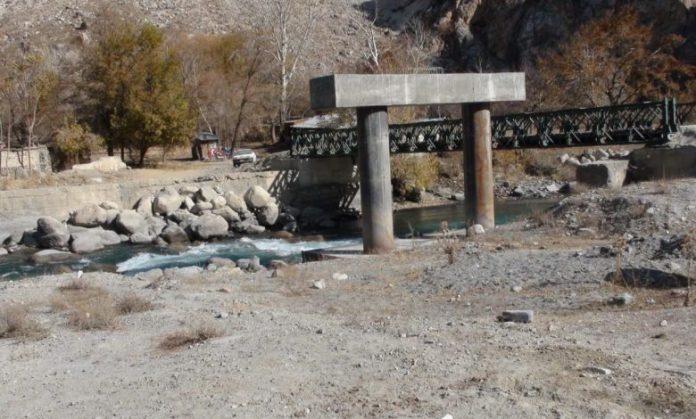 More than six years after its destruction in 2015 floods, Shoghor suspension bridge is Chitral district is still awaiting its reconstruction.

July 2015 floods had washed away the wooden bridge of Shoghor area in Lotkuh tehsil of Lower Chitral district.

Communication and works department had awarded a contract for constructing a reinforced  concrete (RCC) bridge to a contractor. However, the contractor left the work unfinished.

Engineer Essa Khan, a local activist regretted that PTI government could not construct a single bridge in six years.

Habibullah Khan, another local said that following the flood, army setup an iron bridge in its place. However, he said that bridge has now deteriorated due to lack of maintenance and heavy traffic.

Waqar Ahmed, another local said that work on the RCC bridge was stopped after a local demanded compensation for his land. He said that the work on the project started after payment to the owner. However, stopped again on account of running out of funds.

Executive Engineer C&W department when approached for comments said that work on the project would start again after provincial government approves more funds for it. He said that currently work has been stopped due to funds shortage.