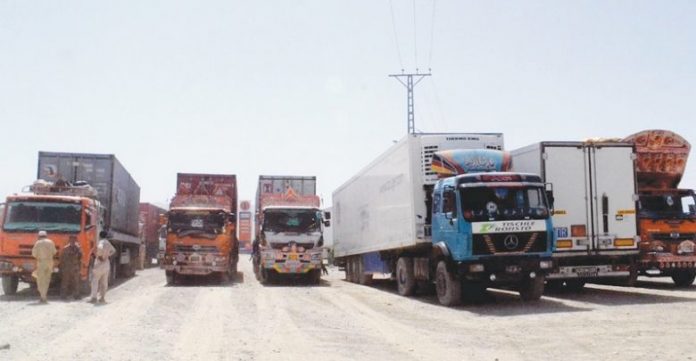 PESHAWAR: A large number of goods trucks carrying different items to Afghanistan under transit trade have been stranded at Chaman border due to slow processing by Customs officials of Afghanistan.

Sources said traffic at the Pak-Afghan border in Chaman has been affected due to the presence of hundreds of transit trade trucks at the border. Passengers are also facing difficulties due to this situation.

The sources said a large number of trucks have been parked on the main road due to shortage of space on the Afghan side of Chaman border. The Afghan Customs officials are processing the trucks very slowly and the number of stranded trucks is increasing with passage of time. The traders are facing huge monitory losses due to this situation.

The stranded traders said they have parked their vehicles at the border for the last several days in hope of getting clearance from Afghan Customs officials. They said the truck owners and traders are suffering massive financial losses due to this situation as their businesses have come to a standstill. The dealers said they pay huge fines to the truck owners for the time lost during clearance and they end up making loss instead of making profit from the business.

The traders said they have parked the trucks on the Chaman border as a compulsion as there is no other safe parking place in the town. They said everyone is disturbed due to this situation. They demanded the concerned authorities to take notice of the matter.

A sanitary worker from Christian community was killed in a road accident in Nowshera on Friday.

The sanitary worker, identified as Sunny Pervez Masih, who was the only bread winner for his family, was killed when his motorcycle was hit by a car of Excise Department.

The wife of the deceased told media that the Excise Department officials are pressuring her to keep silent. She said he has three daughters and now they have no one to look after them. She demanded the government to provide her justice.

The mother of Sunny Pervez Masih alleged that the Excise Department officials are offering money in exchange for shutting of the case.

Police have filed an FIR against the driver of the Excise Department and initiated investigation.