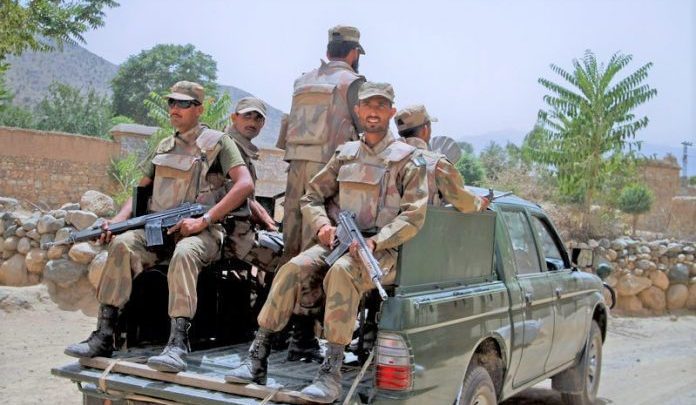 MIRANSHAH: A security personnel was martyred and five others were injured in two bomb attacks in North Waziristan tribal district on Wednesday.

Official sources said that the bomb disposal squad in Dattakhel tehsil was attacked with a remote control bomb in which one personnel was martyred and three others were injured. The security personnel were in Khar Kamar area when they came under attack.

The martyred personnel were identified as Javed, while the injured include Wali, Rustam and Bilal. The body and the injured were taken to Miranshah Army Camp Hospital.

The security forces cordoned off the entire area and launched search operation. However, there were no reports about any arrest.

Official sources said no life loss happened in the rocket attack as the rocket landed in open ground. The sources said security personnel were coming to the site of the incident from Hasukhel village when unidentified miscreants attacked them near Gulshan Adda through a remote control bomb. Two security personnel, including an officer were injured in the blast. The injured soldiers were identified as Lieutenant Colonel Bilal and Naik Faisal.

After the second remote control attack on security force, the soldiers cordoned off the entire area and launched search operation. No banned outfit has claimed responsibility for attacks on security forces and school in North Waziristan so far.

The people of North Waziristan have expressed concern over security situation in the area ahead of the provincial elections scheduled on July 20. The attacks on security forces happened two days after lifting of Section-144 from North Waziristan by the local administration. Section-144 was imposed a month back due to law and order concerns. The administration said that Section-144 was lifted to facilitate the candidates to conduct the election campaign without any restriction.

Section-144 was imposed on June 8 for one month due to the precarious security situation in the district after the Khar Kamar tragedy. The election candidates appreciated the decision to lift the restrictions on holding public meetings. A day earlier, North Waziristan election candidates had demanded the government to immediately withdraw Section-144 and allow them to carryout election campaign without any restrictions.