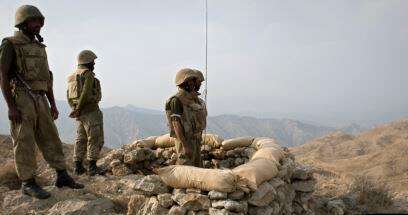 PESHAWAR: A Pakistani soldier embraced martyrdom as terrorists from Afghanistan across the international border opened fire on a military post in North Waziristan tribal district on Saturday.

According to the Inter-Services Public Relations (ISPR), Pakistani troops responded in a befitting manner to the attack. During exchange of fire, Sepoy Umar Daraz, 32, resident of Jhang district of Punjab, embraced Shahadat.

The ISPR said Pakistan has consistently asked Afghanistan to ensure effective management and control on their side of the Pak-Afghan border. Pakistan strongly condemns the continuous use of Afghan soil by terrorists for activities against Pakistan. This is third attack by terrorists from Afghanistan across the border on Pakistani troops during this month.

On May 08, a Pakistani soldier sustained injuries in a cross-border attack by militants based in Afghanistan in Bajaur tribal district.

The militants from across the border opened fire on a Pakistani check post in Bajaur, leaving one soldier injured, ISPR said in a statement. Pakistani troops promptly responded to the attack. The ISPR said that Pakistan has consistently been requesting Afghanistan to ensure effective border management.

The cross-border attack in Bajaur happened three days after four Pakistani soldiers were martyred and six others were injured along the Pak-Afghan border in an ambush by militants from Afghanistan.

The ISPR said the soldiers were busy in fencing the border in Zhob area of Balochistan when they came under attack.

Pakistan is constructing a fence along its 2,500km long border with Afghanistan to secure the area from cross-border infiltration. Afghanistan is against the fencing and says it would divide families and friends along the Pashtun tribal belt. However, Pakistan says fencing is necessary to stop the use of Afghan soil against Pakistan.

Pakistan is facing aggression from across the Afghan border recently and several deaths and injuries have happened in such incidents recently.

On May 05, the security forces conducted an intelligence-based operation (IBO) in North Waziristan during which two terrorists were killed.

According to the Inter-Services Public Relations (ISPR), during the exchange of fire with the terrorists in Dosali area, an officer, identified as Captain Faheem, and two soldiers, identified as Sepoy Shafi and Sepoy Naseem, embraced martyrdom.