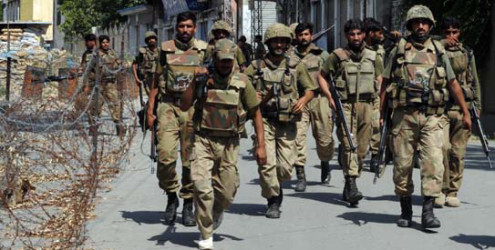 BARA: A soldier was injured in a landmine blast in Rajgal area of Tirah valley in Khyber tribal district on Tuesday.

Security sources said the incident happened during fencing of the Pak-Afghan border. The injured soldier was identified as Hamza Bashir who was taken to a military health facility for treatment.

The security forces launched a search operation in the area after the incident. However, there were no reports about any arrest.

Meanwhile, one person was killed and three others sustained injuries when two groups exchanged fire over an old enmity in Lakki Marwat on Wednesday.

From one group, Rizwan was killed in the firing, while Farman was injured, and from the other group, two brothers, Attaullah and Hayatullah, said to be absconders, were injured. Both the injured brothers managed to escape from the scene.

The firing happened in the jurisdiction of Pezu Police Station. Police launched a search for the two injured brothers after the firing. Ten persons from both families have been killed so far over old enmity.