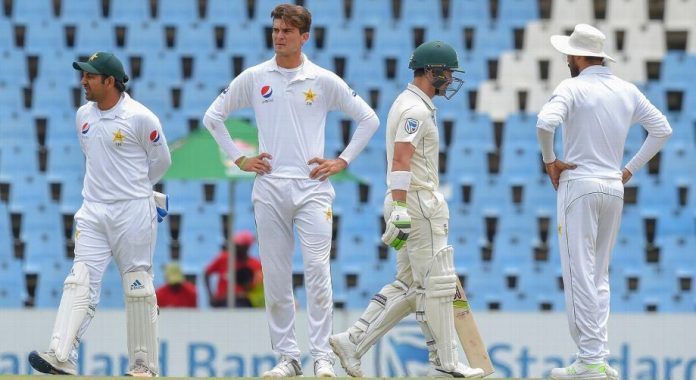 PESHAWAR: South Africa gained 1-0 lead in the three-match Test series against Pakistan on Friday by defeating them in the Centurion Test within three days.

South African batsmen were tested initially while chasing a modest target of 149, but once they get set, it was a smooth sailing. Opener Aiden Markram was out on a duck after which Dean Elgar and Hashim Amla both survived chances and then get steady and put on 119 for the second wicket. They reached the target with six wickets to spare, with Amla scoring 63 and Elger scoring 50.

Besides poor batting, Pakistan also ran out of luck in the second innings as Amla was dropped on eight at third slip by Fakhar Zaman, while the frustration grew further when Elgar was caught at first slip when he was on four, but the TV umpire ruled that the catch was not cleanly taken. Elger had even walked back, thinking that he was out, but then he was called again for batting. Pakistan coach Mickey Arthur was also visibly disturbed over the situation and was protesting.

Another interesting development was that captains from both sides, Sarfraz Ahmed and Faf du Plessis, lost their wickets in both innings without scoring.

Duanne Olivier was declared player of the match for his brilliant bowling in both innings. He took six wickets in the first inning and five more in the second inning.

Faf du Plessis admitted after the end of the match that his team were lucky to get few chances. He also praised Pakistani bowlers for their brilliant bowling.

Sarfraz Ahmed although admitted that his team batted poorly, but he also pointed towards the umpiring error, saying that the on-field decision of Elgar’s catch should have stayed. He said Pakistan had good chance in the second inning for getting a healthy lead, but it was squandered. He said the bowling unit performed better and the team will sort out changes in the next game.

The second match of the series will begin in Cape Town on 3 January, while the last match will be played in Johannesburg on 11January.