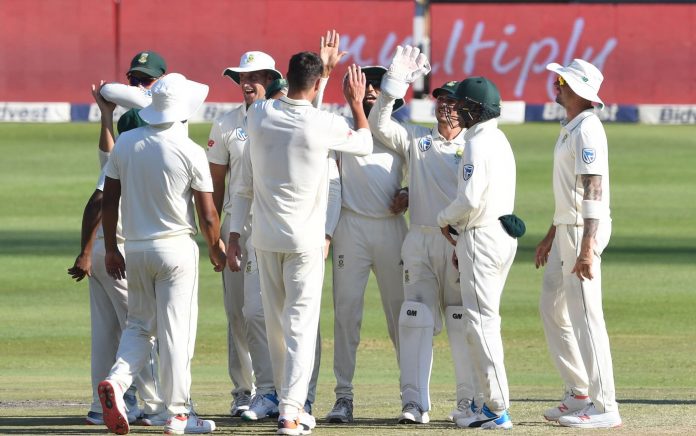 PESHAWAR: As was expected, South Africa completed 3-0 whitewash in the Test series against Pakistan by winning the third Test at the Wanderers on Monday.

Chasing a target of 381 runs, Pakistan were all out on 273 and lost by as big margin of 107 runs. Asad Shafiq was top batsman for Pakistan with 65 runs, while Shadab Khan remained unbeaten on 47. Captain Sarfraz Ahmed again failed with the bat and was bowled on the first ball he faced.

For South Africa, Duanne Olivier was again the pick of blowers who and Kagiso Rabada took three wickets each, Dayle Steyn took two wickets and Philander took one wicket.

The dismal batting form of Pakistan on the fast and moving pitches summed up their fate in the series. However, the performance of the bowlers was better and they created chances for Pakistan to fight in the series, but the batsmen did not respond well.

Sarfraz after the match admitted that the batting was the main reason behind the series loss. He said credit goes to bowlers as they bowled really well. He also praised the batting abilities of Shan Masood and Babar Azam. He was also all praise for Olivier and termed him one of the best bowlers.

Dean Elgar, who captained South Africa in the third Test in absence of Faf du Plessis due to his suspension, praised his team, especially the quick bowlers. “This is right up there and extremely proud of the guys and it’s a good way to start the year,” he said.

It was seventh straight series win for South Africa at home. With the 3-0 whitewash, South Africa have leapfrogged England and New Zealand to second spot in the ICC Test rankings, while Pakistan have slid to seventh.

Pakistan will also play five one-day internationals and three T20 matches during the South Africa tour. The first ODI will be played on 19 January.