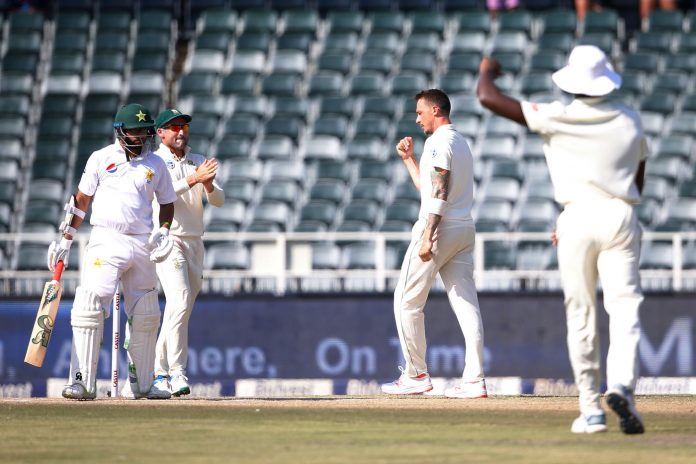 PESHAWAR: South Africa continued to dominate the third Test against Pakistan on third day of the match at the Wanderers on Sunday.

South Africa managed to get a big lead due to the brilliant century of Quinton de Kock, the fourth by the Proteas wicket-keeper. He scored 129 runs with a good pace and took the total in the second inning to 303. That meant that Pakistan got a daunting and massive target of 381. Hashim Amla also contributed with 71 runs.

Pakistan captain Sarfraz Ahmed called for a heavy roller on the pitch before coming to bat. It looked like the game will end within three days keeping in view Pakistan’s dismal batting performances in the Test series so far. However, they started comparatively better and managed 153 runs on the board with the loss of three wickets at the end of the day’s play. Imamul Haq was out on 35, Shan Masood scored 37 and Azhar Ali scored 15. Asad Shafiq was playing on 48 and Babar Azam on 17 at the end of the day’s play.

Dayle Steyn took two wickets and Olivier took one wicket. Olivier has taken 22 wickets in the series so far and he is a firm favourite to bag the man of the series prize when the match ends. Azhar Ali’s poor form throughout the series is a particular cause of concern for Pakistan.

Pakistan still need 228 more runs to each the target, which seems to be an extremely difficult task on a deteriorating pitch. In their previous five innings Pakistan have crossed the 200 mark only once and they haven’t crossed the 300 mark yet. It means that Pakistan will have to play out of their skins to avoid a series whitewash against Proteas. Pakistan have never won a Test match at the Wanderers and Proteas are looking favourites to win again. They are leading the three-match Test series 2-0 after comprehensive victories in the first two Tests.