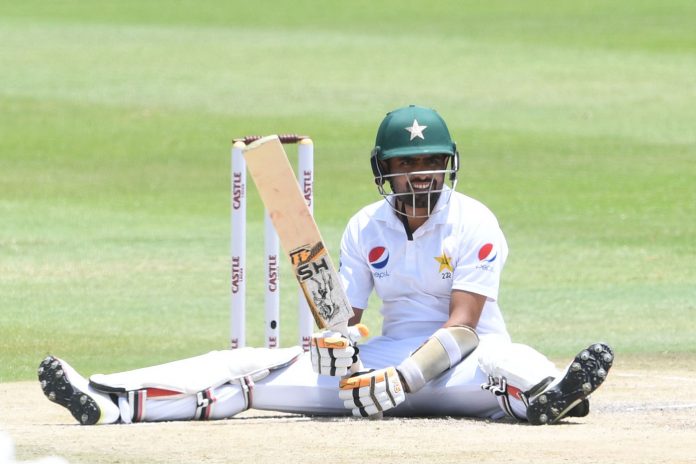 PESHAWAR: The third Test between Pakistan and South Africa at the Wanderers was firmly under the control of the host team at the end of the second day’s play on Saturday.

It was another day of a wasted opportunities for Pakistan as in reply to South Africa’s first inning score of 262, Pakistan at one stage were cruising 169/5 when Babar Azam and captain Sarfraz Ahmed were batting superbly and with a healthy pace, but as soon as Sarfraz got out, the rest of batsmen did not stand up and the last five wickets fell for just 16 runs. Three wickets fell on the same score of 169 and the remaining two on 185. That means that Pakistan once again failed to cross the 200 mark in their inning and also squandered an opportunity to consolidate their position in the match. Sarfraz, who was under pressure to perform, batted well for his 50, while Babar Azam scored 49 and Imamul Haq scored 43.

The particular disappointment for Pakistan came when their main and senior batsmen Asad Shafiq and Azhar Ali were out without scoring. Faheem Ashraf, who was included in the team with the hope of contributing with the bat, also failed to deliver and was out for duck on the first ball he faced. In the first hour of the game, Pakistan benefited from the four dropped catches and a missed run-out, but after that South Africa showed better discipline throughout the day.

Duanne Olivier was the pick of bowlers for Proteas who took five wickets, Philander took three wickets, while Rabada took two. Babar Azam was again dominating against Dayle Steyn and hit him for few boundaries, after which he was removed from the attack. He remained wicketless.

South Africa gained first inning lead of 77 runs on a difficult pitch which was a massive advantage. Proteas were playing on 135/5 when the day’s play ended. Hashim Amla was unbeaten on 42, while Quinton de Kock was playing on 34. Faheem Ashraf took two wickets, while Mohammad Amir, Mohammad Abbas and Shadab Khan took one wicket each.

Proteas now have an overall lead of 212 runs with five wickets still in hand. With this scorecard it is looking extremely difficult for Pakistan to avoid the series whitewash.