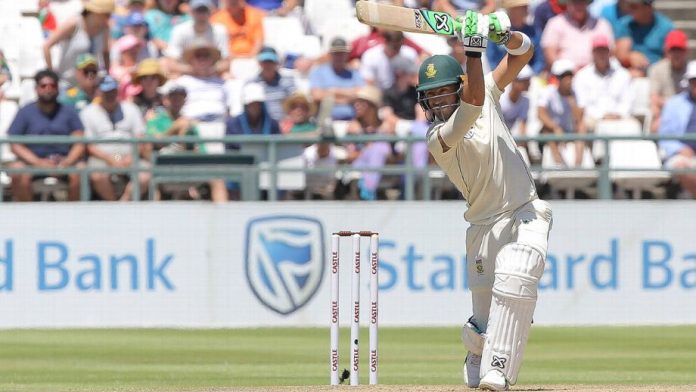 PESHAWAR: It was another tough day for Pakistan on the field as South Africa dominated the second day of Cape Town Test and gained a lead of 205 runs in the first inning with four wickets still intact.

Faf du Plessis marked return to form with 103 runs, his ninth Test century and first at his adopted home ground of Newlands, while Bavuma scored 75 and de Kock 55. South Africa were playing on 382 for six when the day’s play ended. With the lead of 205, South Africa are still looking good to further enhance their lead and win possibly with a margin of an inning.

Shaheen Shah Afridi took three wickets for Pakistan, while Mohammad Aamir, Shan Masood and Mohammad Abbas took one wicket each. Yasir Shah failed to get any wicket as he didn’t get much assistance from the pitch. Pakistani pacers toiled hard, but good batting by South Africans kept them denying.

Pakistan will have to do something extraordinary to avoid a massive defeat in the second Test which is almost out of their hands.

It was Pakistan’s low score in both innings of the Centurion Test that caused their defeat. And from the outcome of the first two days play in Cape Town, it seems extremely difficult for Pakistan to avoid the same fate in the second Test. Pakistan are yet to cross the 200 mark in the three innings in the Test series so far and although their bowling looked good in the first Test, but they were not so successful in the second Test.

Pakistan put their faith in the top six batsmen and retained them in the second match in a hope of better performance, but it didn’t happen. Haris Sohail has already been ruled out of reminder of the series due to injury. Pakistan are already down 1-0 in the three-match Test series against South Africa and defeat in the ongoing match will means another Test series defeat for Pakistan.

After conclusion of the Test series, Pakistan will also play five-match one day international series and a T20 series against South Africa.