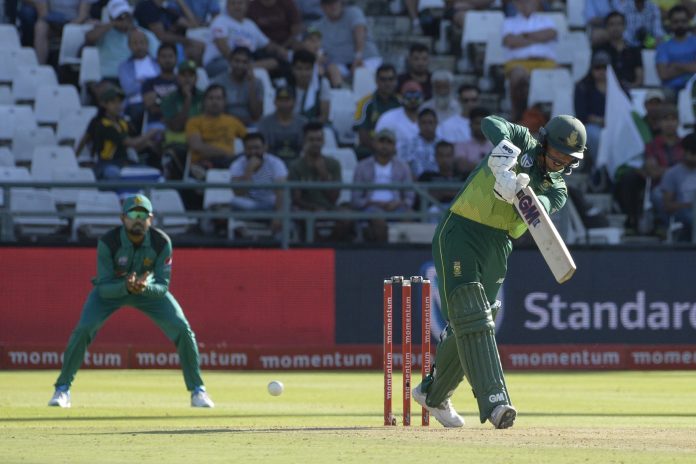 PESHAWAR: South Africa won the five-match ODI series against Pakistan 3-2 by recording easy victory in the fifth match of the series at Cape Town on Wednesday.

South Africa invited Pakistan to bat first after winning the toss and restricted them to 240 for the loss of eight wickets. Fakhar Zaman was top scorer for Pakistan with 70 runs, while Imad Wasim scored 47. The rest of batsmen failed to click and in the end it was an easy total for the hosts. Mohammad Rizwan struggled for form and could score only 10 runs in the 30 balls he faced, while Mohammad Hafeez scored 17 runs in 28 balls. Shadab Khan also took 42 balls to score 19 runs, and resultantly the too many dot balls cost Pakistan the match.

For South Africa, Andile Phehlukwayo and Dwaine Pretorius took two wickets each, while Dayle Steyn and Mulder took one wicket each.

It was a smooth sailing for South Africa in the batting as they chased the target with seven wickets and 10 overs to spare. Quinton de Kock was the pick of batsmen with 83 runs, while Faf du Plessis and Rassie van der Dussen scored 50 runs each.

Shaheen Shah Afridi, Usman Shinwari and Mohammad Amir took one wicket each. Pakistani bowlers couldn’t trouble the Proteas batsmen much and Shadab Khan was most expensive as he conceded 78 without taking any wicket.

Imam said he had a point to prove and he did that. “We have a tough Test series against South Africa, so we were playing some tough cricket earlier. ODI cricket after Tests is easier because you’re comfortable. I was in a good nick in New Zealand and Asia Cup as well,” he said.

Pakistan captain Shoaib Malik said it was a good thing for Pakistan that they are fighting till the end. He said some batsmen got good start, but they couldn’t capitalise. “Imam is improving day-by-day, and the way he’s playing is a very good sign for Pakistan cricket,” he said.

Both teams will now prepare for the first match to the three-match T20 series which will be played in Cape Town tomorrow (Friday).