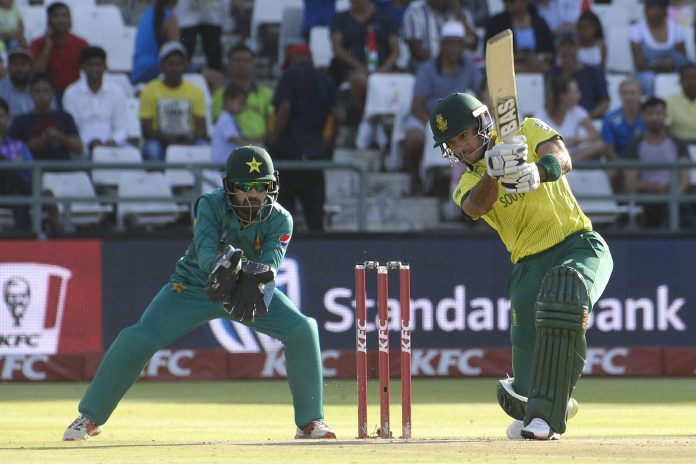 PESHAWAR: South Africa defeated Pakistan by six runs in first match of the three-match T20 series in Cape Town on Friday and gained 1-0 lead in the series.

South Africa after being invited to bat first scored 192 runs for the loss of six wickets. South African captain Faf Du Plessis scored 78, while Hendricks scored 74. Although the boundaries were short and the pitch was good for batting, but the Pakistan bowling lacked bite to control Proteas batsmen and they scored freely. It was only at the end of the Proteas inning that Pakistan managed to take few wickets and restricted them below 200.

Usman Khan Shinwari took three wickets, while Imad Wasim, Hasan Ali and Faheem Ashraf took one wicket each. Besides Shinwari, Imad Wasim bowled well and conceded just 23 runs in his quota of four overs, while all other bowlers went for plenty. Shadab Khan was especially at the receiving end as he went for 38 in three overs. The undisciplined bowling and fielding allowed South Africa to score a massive total which was very difficult for Pakistan to chase.

When Pakistan started their batting, Fakhar Zaman was out for 4 after which Babar Azam (38) and Hussain Talat (40) batted well to solidify Pakistan’s position. However, both lost their wickets in pressure of mounting asking rate and rest of the batsmen, except Shoaib Malik (49), couldn’t bat long. Asif Ali and Hasan Ali contributed with little cameos, but Pakistan needed an extended cameo from at least one of them to win, which didn’t happen.

However, it was a hard fought contest and Pakistan never lost hope till the last over. In the end they fell short by just six runs in a massive chase.

Tabraiz Shamsi, Handricks and Morris took two wickets each, while Andile Phehlukwayo took one wicket. The fielding of South Africans was also good and they took good catches. Despite some good batting and bowling performances from both sides, David Miller was named player of the match for his brilliant fielding and run-out.

The second match of the T20 series will be played in Johannesburg tomorrow (Sunday).