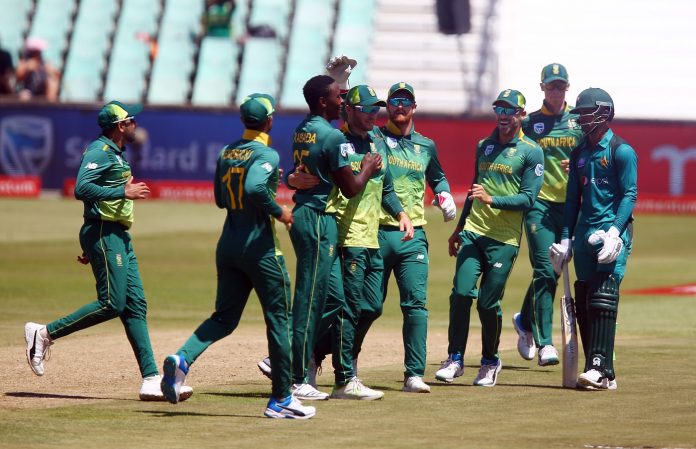 PESHAWAR: South Africa levelled the five-math ODI series with Pakistan 1-1 with a five-wicket victory in the second match at Durban on Tuesday.

South Africa asked Pakistan to bat first keeping in view the uncertain nature of the pitch. Their decision proved to be correct as the Pakistani batting line collapsed to 112/8 and it was only because of Hasan Ali’s brave knock that they took the score to 203. Hasan scored a fearless 59 off just 45 deliveries and was looking set to score even more, but he was brilliantly caught at boundary by Proteas captain Faf du Plessis.

Captain Sarfraz Ahmed batted well for his 41 in his 100th ODI, while no other batsman contributed considerably. Hussain Talat, who was given debut by Pakistan while resting all-rounder Imad Wasim, was out on just 2 runs. Omission of Imad Wasim was really surprising for many as he could have also contributed with the bat as he often does. Faheem Ashraf, who is yet to contribute with the bat on South African tour, failed again on Tuesday and was out without scoring. Fakhar Zaman, Babar Azam and Shoaib Malik got starts, but couldn’t score big.

Pakistan’s start to bowling was good as they got five wickets on 80 runs, but after that Phehlukwayo (69) and van der Dussen (80) took the match to the end without further losses. Together they put on 127 – which is a record for the sixth wicket at the Durban ground. Sloppy fielding and missed opportunities from Pakistan also assisted Proteas in the end.

Phehlukwayo was declared player of the match for his brilliant all-round performance. “If you hit the deck hard, there was a bit in there. I was a bit nervous to begin with when I batted. Rassie did a good job of calming me down. I stuck to my plans and played with intensity,” he said after the match.

Sarfraz regretted loss of wickets easily. “Hasan Ali batted really well and put some hope into the team. We had a chance when we had them 80 for 5, but Phehlukwayo and the other batsman batted really well,” he said.