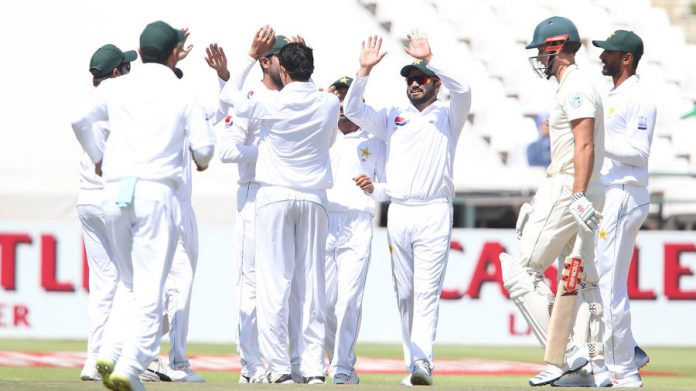 PESHAWAR: South Africa defeated Pakistan in the second match of the three-match series in Cape Town on Sunday and won the series 2-1.

Pakistan was bowled out in the second inning for 294 runs and set a target of just 41 runs for the home side, which they chased with the loss of just one wicket. Bruyn was the only many to get out on four runs by Muhammad Abbas, while Hashim Amla was retired hurt when he was playing on two runs. Elger was fluent with his 24 runs.

Pakistan’s start to the second inning wasn’t ideal, however, the middle order performed well this time to take the score to 294, leaving the Proteas needing just 41 runs for victory today (Sunday). Asad Shafiq marked return to form with his aggressive 88, Shan Masood scored 61 and Babar Azam added 72 with some assistance from tail-enders to frustrate South African bowlers in the last session of the day. It was the first time Pakistan crossed the 200 mark in their tour to South Africa, however it wasn’t enough to save them from defeat.

For South Africa, Kagiso Rabada and Dale Steyn took four wickets each, while Philander and Olivier got one wicket apiece.

South African Captain Faf du Plessis was declared player of the match for his brilliant century in the first inning. He said after the match that he enjoyed scoring runs on his favourite ground which came at the right time. He praised his bowlers who played major role in the series win against Pakistan.

It is seventh straight series win for South Africa on their soil. South Africa haven’t lost a home series since losing to England in 2015-16.

After conclusion of the Test series, Pakistan will also play five-match one day international series and a T20 series against South Africa.