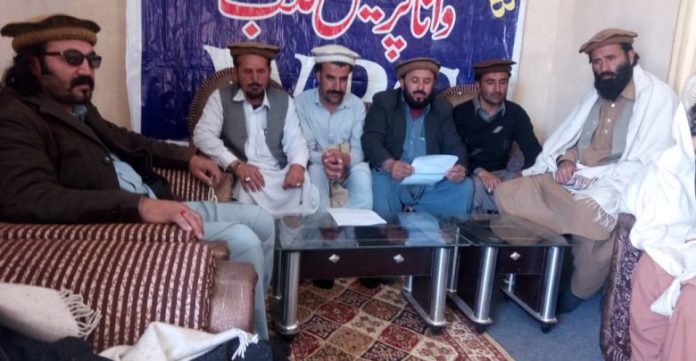 WANA: The personnel of Khassadar Force in South Waziristan tribal district have threatened to boycott their duties if their pending salaries were not paid immediately.

Addressing a press conference at Wana Press Club on Thursday, the representatives of the Khassadar Force in South Waziristan said they had not been paid their salaries for the last seven months due to which they and their families are facing a lot of difficulties. They said they have been subjected to unjust attitude by the government by depriving them of their salaries. The Khsassadars said they have no money to look after their families and pay the fee of their children in schools. They said they fear that their children may be expelled from school due to non-payment of fee.

The Khassadars said the district administration is well aware of the situation, but it is not paying any heed towards the problem. They said this attitude of the administration towards 1,400 Khassadars in the tribal district and their families is extremely disturbing.

The Khassadars also mentioned during their press conference that their colleagues in the neighbouring North Waziristan tribal district get their salaries in time at the end of every month, but the personnel from South Waziristan have been deprived without any reason.

They threatened that they will boycott the security duty during the future polio immunisation campaigns if their seven-month salaries were not paid by 18 February. They said the responsibility of 30,000 children of the tribal district missing the polio vaccination will rest with the administration in such a scenario. They said all the Khassadars are unanimous in their demands and in case they opted for boycott, then all the security check posts will be vacated and not even a single Khassadar will perform his duty.

Earlier, the honorary Khassadars in Khyber tribal district while addressing a press conference at Jamrud press club demanded the government to regularise them after merger of erstwhile Fata with Khyber Pakhtunkhwa.

The honorary Khassadars said they are serving for the last 15 to 20 years and have offered sacrifices for peace in the region. They said they deserve regularisation like other Khassadars for their services. They also sought relaxation in age for regularisation.