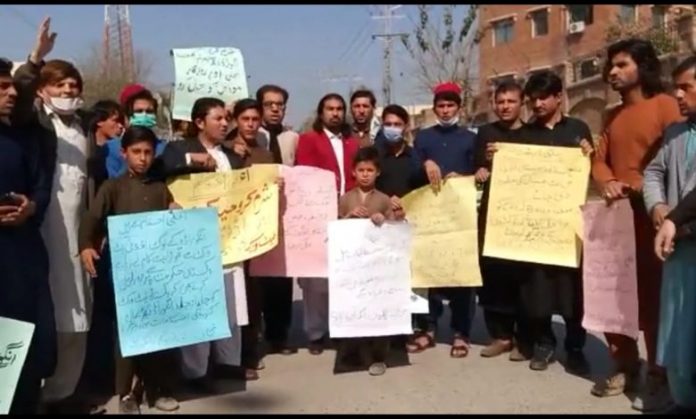 PESHAWAR: The people of Angoor Adda area of South Waziristan tribal district on Wednesday staged a protest demonstration outside the Peshawar Press Club over lack of basic facilities in their area.

The protesters were carrying banners and placards inscribed with slogans in favour of their demands. The protesters said basic facilities of education, healthcare, roads and mobile phone network are not available in their area due to which they are facing a lot of difficulties. They said the problem of prolonged power outages have made the lives of people of the area miserable. They said there is severe shortage of schools and colleges and their children had to go to far-flung areas to acquire higher education. They said the establishment of schools, colleges and hospital in the Angoor Adda will reduce their difficulties.

The protesters also criticised the closure of Pak-Afghan border which had affected their business. They said they must be allowed to travel to Afghanistan and the local road must be repaired and converted into a highway. They said they would continue their protest if their demands were not accepted.

Few days earlier, the temporarily displaced persons (TDPs) of North Waziristan held protest in favour of their demands outside the Peshawar Press Club.

The protest was also attended by former Member of National Assembly Ayesha Gulalai who criticised the government for what she termed its failure to give due rights to people of merged tribal districts. She said the people of merged districts always offered huge sacrifices for the country, but in return the government has stopped their ration. She alleged that the Provincial Disaster Management Authority (PDMA) has usurped the rights of the people of tribal districts.

The protesters, under the tribal traditions, staged protest while dancing on the drumbeats. They said the PDMA has stopped the monthly ration to the homeless families of North Waziristan, which must be restored immediately.

The protesters said the TDPs have also not received the compensation amount for the last four months. They said the government should open Ghulam Khan and Angoor Adda borders for the TDPs of North Waziristan who are still stranded in Afghanistan.