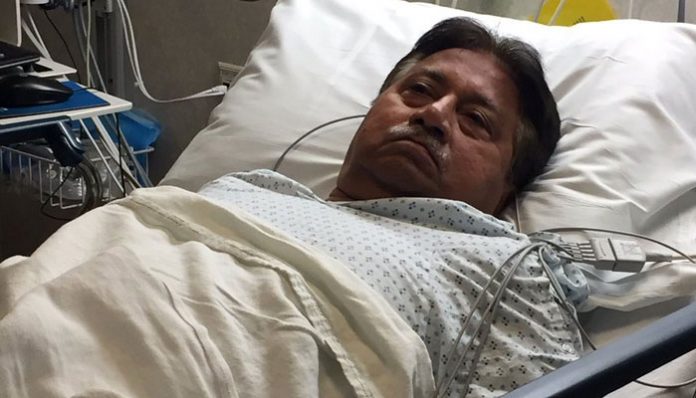 PESHAWAR: The Special Court hearing high treason case against former president General (Retd) Pervez Musharraf on Tuesday announced its verdict and handed death sentence to him under Article 6 of the Constitution of Pakistan.

The previous government of the Pakistan Muslim League-Nawaz (PML-N) had filed treason case against Pervez Musharraf over imposition of emergency rule in the country in November 2007. The special court bench was formed on the orders of the Supreme Court of Pakistan. It is unprecedented in the history of the country that a former military chief has been awarded death sentence.

The special court in its order said it has found Musharraf guilty of high treason according to Article 6 of the Constitution after going through arguments, records, facts and complaints. It was a majority verdict as one judge opposed death sentence. Justice Waqar Ahmed Seth announced the short verdict and said that the detailed verdict will be issued in two days.

During the hearing of the case earlier, the prosecution team on behalf of the PTI government led by Ali Zia Bajwa Advocate prayed the court to amend the indictment against Musharraf as the government wants to frame charges against other co-accused including former prime minister Shaukat Aziz, former chief justice Abdul Hamid Dogar and former law minister Zahid Hamid.

The special court remarked that the Supreme Court of Pakistan has already decided this issue and gave the government two weeks to submit a new charge sheet on the case.

At one point Justice Shahid Karim asked whether the government was using delaying tactics in the treason case. The judge said the government must file a new complaint if it wanted to add additional names in the high treason trial.

‘Armed forces in pain and anguish’

The Pakistan Army said that it was in a lot of pain and anguish over the sentencing to death of Pervez Musharraf.

“An ex-army chief, Chairman Joint Chiefs of Staff Committee (CJCSC) and President of Pakistan, who has served the country for over 40 years, fought wars for the defence of the country can surely never be a traitor,” the ISPR said in a statement.

It said that due legal process seemed to have been ignored including the constitution of a special court, denial of fundamental right of self-defence, undertaking individual specific proceedings and concluding the case in haste.

“Armed forces of Pakistan expect that justice will be dispensed in line with the Constitution in the Islamic Republic of Pakistan,” added the statement.